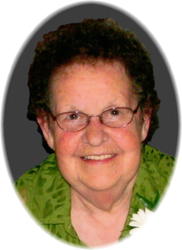 Mass of Christian Burial celebrating the life of Irene VanHeel, 80, of St. Anthony, will be at 11:00 AM Saturday, December 29, 2012 at St. Anthony Church in St. Anthony.  Father Michael Naughton, OSB will officiate and burial will take place in the parish cemetery.  Irene passed away peacefully in her sleep at her home Wednesday morning.  There will be a visitation from 4:00-8:00 PM Friday, December 28, 2012 at St. Anthony Church in St. Anthony, and again after 10:00 AM until the time of service on Saturday at the church.  Parish Prayers will be at 4:00 PM Friday at the church and Christian Mothers will pray the rosary at 7:30 PM Friday also.  Arrangements are being made with Miller-Carlin Funeral Home of Albany.Irene was born on December 21, 1932 in St. Joseph to Mary (Klein) and Henry Feld and grew up there with her eight siblings.  Irene married Raymond VanHeel on July 9, 1955 in St. Joseph.  They started their married life by taking over the family farm in St. Anthony.  Irene was a homemaker, and raised nine children on the farm she worked with her husband.  She was well known for her awesome fried chicken and Special-K bars, was an excellent cook who often would feed the farm helpers, and did lots of canning and pickling with items she grew in her own garden.  Irene was an amazing farm wife who helped with fieldwork, milked the cows, threw hay bales, and especially enjoying working with the calves.  A very crafty person, her free time was spent helping kids with 4-H projects, knitting, quilting, crocheting, and rug making.  Irene even demonstrated rug making at Pioneer Days in Albany.  She also liked to go square dancing and would make her own dresses.  As her children became parents, Irene took on a new role and loved to spoil her grandchildren (and granddogs) with unconditional love and by always having a bottomless candy bowl on the table (and special treats for the dogs).  She was an active member of St. Anthony Church and a member of Christian Mothers.Irene is survived by her children Gary (Loretta) VanHeel, Albany; Wayne “DA” VanHeel, St. Anthony; Linda (John) Kurtz, Avon; Randy VanHeel, St. Anthony; Carolyn (Dan) Reisdorf, St. Joseph; Sandy (Dan) Wielenberg, St. Anthony; Mary (Jeff) Zenner, Albany; Charlene (Bruce) Gerads, Holdingford; and Patsy (Jason) Birr, Oak Grove; her siblings Sylvester (Mary) Feld, Delphine (Tom) Auer, and Darlene (Tony) Achmann; her in-laws Larry Skaalerud and Mary B. Feld; her nineteen grandchildren; and her eleven great-grandchildren.She is preceded in death by her husband of 41 years in August of 1996; her parents Mary and Henry Feld; and her siblings Gerhard, George, Benny, Leona, and Dorine.

Irene was such a wonderful lady.