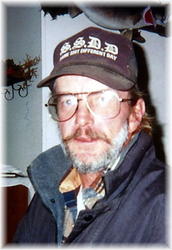 Funeral Services celebrating the life of James “Jim” Irving Moody, age 55 of St. Cloud will be 1PM, Saturday, July 14th 2012 at the Miller-Carlin Funeral Chapel in St. Cloud.  Pastor Sue will officiate and burial will take place at a later date at Acacia Cemetery in Clearwater.  Jim unexpectedly died in his home Tuesday morning.  There will be a visitation prior to the service on Saturday starting at 12PM at the funeral home.  Arrangements are being made with the Miller-Carlin Funeral Home of St. Cloud.Jim was born October 22, 1956 in Monticello to Irving and Mabel (Schalberg) Moody.  He lived in the Clearwater/Hasty area until moving to St. Cloud where he has lived for the past seven years.  Jim was an avid outdoorsman with a great love of hunting.  He also had a passion for racing and to relax, he enjoyed reading.  He was a member of the North American Hunting Club.Jim is survived by his children Robert Moody, St. Cloud Rebecca “Becky” Moody, St. Cloud; Tahlia Moody, St. Cloud; his grandchildren Terrence, Tyrelle, Kevin, and Ethan Moody; and his siblings Ardis Hoffman, Cedar, MN; Marlys (Bill) Wheeler, Delano; and Gene (Judy) Post, Clearwater as well as many nieces and nephews.He is preceded in death by his parents Mabel and Irving Moody, and his brother-in-law Chuck Hoffman.In lieu of flowers, memorials are preferred.

There will be a visitation from 12-1PM Saturday afternoon at the Miller-Carlin Funeral Home in St Cloud.

Memorials are preferred in lieu of flowers

Bobbie, Becky, and Tahlia; Thinking of you guys during this sad time. Your dad was a great man and was very kind. You are in my thoughts and prayers.

Deepest sympathies on the loss of your father. Our thoughts and prayers are with you.

With Deepest Sympathy! Sorry for the loss of your father, James. You are in my thoughts and prayers!