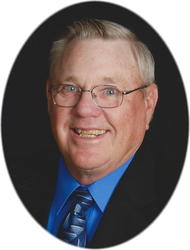 James “Jim” V. Wimmer, age 71, of Albany, MN passed away at home on August 21, 2015 surrounded by family.  A public gathering in memory of Jim will be held from 4 PM to 8 PM Friday, August 28 at Seven Dolors Church in Albany, MN.  Funeral service to be private.

Born in Melrose, MN to Joe and Eleanor Wimmer, Jim graduated from Albany High School in 1961.  He served in the U. S. Army Reserve from 1962 to 1968.  Jim successfully operated a second generation dairy farm outside of Albany.  Once retired from farming, Jim enjoyed part-time employment with Kozy Kab where he made many friends while driving elderly and disabled clients to medical appointments.  Jim was a loving husband, father and grandfather.  Family was the focal point of his life.  In his free time Jim was an avid fisherman who spent summers angling Lake Edward and winters spear fishing a secret hot spot.  He was also a skilled card player and sportsman who never let facts get in the way of a good story.

Jim is preceded in death by his daughter, Carla Wimmer and parents, Joe & Eleanor Wimmer and in-laws Adalbert and Appolonia Welle.

Gethering space of the Seven Dolors Catholic Church in Albany

My sympathies to you

Will sure miss Jim’s contagious laugh and smile!

Joyce and Family…. We are so sorry for your loss. Have been praying for you all. May the Lord give you strength and comfort…. Lots of Love, Scott, Sherry and the kids

My thoughts and prayers are with you and yours. May God bless you and have Jims soul rest in peace till your paths cross again. Amen…..          Dave-a-role

PS: I wonder if God has limits on how many fish you can keep in heaven?

Willy and I send our sympathy, love, and prayers to all the family.  I have known Jim all my life, he was a great friend and neighbor.  There are so many great childhood memories of living on the farms next to each other. The ball games, the Halloween parties, the threshing crews, ……… It was always  a good time when Jim was around.   I remember a lot of “discussions” that Jim and my dad had, along with a lot of fishing stories, and Jim’s laughter.   I can just imagine Jim, my dad, and Don together once again. Their lives have not ended, they have just changed. God bless. Eileen