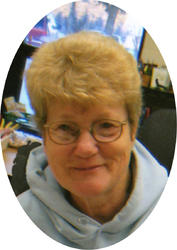 JANIS LOUISE PAGGENJuly 16, 1945 – December 30, 2012The Mass of Christian Burial, celebrating the life of Janis L. Paggen, age 68 of St. Stephen, will be 11:00 AM Saturday, January 5, 2013 at the Church of St. Stephen in St. Stephen. Burial will be in the parish cemetery. There will be a visitation from 4-8:00 PM Friday and again after 10:00 am Saturday at the St. Stephen Parish Hall. St Stephen American Legion Post 221 Auxiliary will pray at 6:30 PM,  St Stephen Parish Prayers will be at 7:00 PM Friday at the parish hall. Arrangements are being made by the Miller-Carlin Funeral Homes.Janis was born July 16, 1945 in Graceville. Her family moved to St. Cloud and she graduated from Cathedral High School. She married Benedict Paggen on July 3, 1965 in St. Anthony’s Catholic Church in St. Cloud. Janis and Ben lived in Anchorage AK while Ben served in the Army. They moved to St. Stephen after his discharge. Janis worked on the assembly line for Franklin Manufacturing in St. Cloud (currently called Electrolux). She then spent 27 years working at the Sartell Paper Mill, retiring in 2009. After she retired, she became the well known chief at the Rusty Nail and she was known for her cooking. Every moment of free time Janis had, she enjoyed spending with the loves of her life, her five grandchildren. She was a member of the Church of St. Stephen and the St Stephen Legion Post 221 Auxiliary.Janis is survived by her husband, Ben, St. Stephen; her children; Tamera Paggen, St. Stephen; Randy (Carrie) Paggen, St. Stephen and Rusty (fiancee Hannah Wruck) Paggen, St. Stephen. She is also survived by her five grandchildren, Monte, Trever, Britany, Nicole and Benjamin. Her sisters and brother, Delores Tritz, St. Jospeh; Kathleen (Jim) Harvey, Osseo; Sherry Petron, Sauk Rapids and Kenny Paulsen, St. Cloud.She is preceded in death by her parents.

There will be a visitation from 4-8:00 PM Friday and again after 10:00 am Saturday St StephenLegion Post 221Auxiliary will pray at 6:30 PM, St Stephen Parish Prayers will be at 7:00 PM Friday

There will be a visitationat the St. Stephen Parish Hall. St Stephen