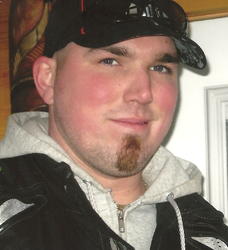 The Mass of Christian Burial, celebrating the life of Jason L. Gutzwiller, age 30 of Albany, will be 11:00 AM, Friday, March 9, 2012, at Seven Dolors Catholic Church in Albany.  Jason died Saturday evening from injuries he received in a snowmobile accident near Walker.  There will be a visitation from 4-8:00 PM Thursday and again after 10:00 AM Friday at the Miller-Carlin-Brenny Funeral Home in Albany.  Seven Dolors parish prayers will be at 4:30 Thursday evening at the funeral home.Jason was born March 12, 1981 in Buffalo to Gordon and Joan (Bongaarts) Gutzwiller.  He grew up in St. Michael and graduated from High School.  He moved to Albany in 2004 and he married Carrie Jennissen on August 25, 2007 in Sauk Centre.  Jason worked for Mid-Sota Manufacturing in Avon where he did welding and fabrication work.  Jason and his family were involved in “Lethal Threat Pulling”; a team that made and competed in lawn tractor pulls.  He was also a member of the New Munich Sno Gliders Snowmobile Club and the Albany Sportsman Club. Jason was a member of Seven Dolors Catholic Church.Jason is survived by his wife, Carrie, Albany; his daughter, Lily Gutzwiller, at home in Albany; his parents, Gordon and Joan Gutzwiller, Melrose; his brother, Jeffrey (Stephanie) Gutzwiller, Big Lake;  his grand-parents, Gordon and Helen Bongaarts, Hanover,, and his father and mother-in-law, Paul and Doris Jennissen, Sauk Centre.In lieu of flowers, memorials are preferred.

No words can express the feeling of losing someone close for no apparent reason, and we don’t understand the “why”.
I am speechless.
Gonna miss ya Buddy!
You were always there to lend a helping hand, no matter what the task.
Our thoughts are with you all.

I can’t believe it. As I sat up town (St. Michael Legion) last weekend with Gordy and Joan and we talked about the good old days. And now this! I remember bowling with Jason like it was yesterday. Jason driving by my house and stepping on the gas to rattle the pipes on his truck. You will always be remembered. Rest in peace Jason.

You will always be in our hearts. We miss you tons already. We will watch over Carrie & Lily (your biggest achievments and love of your life.) Love ya Buddy

Carrie- My heart goes out to you and Lily during this difficult time of loss. You are Loved.

Carrie and family, our hearts go out to you. We are praying for you.
We wish you did not have suffer this loss.
May God bless you and and yours.

I am so sorry for your loss, words can’t express…My thoughts and prayers are with you during this very difficult time. The lord will take care of him.

Was Very sorry to hear of Jasons passing. We will keep him and his family in our prayers.

Dear Carrie,
I am so sorry to hear about Jason’s death. I still remember meeting him at the Runestone in Alex when you were selling jewelry. He was very funny that day and it was obvious you two were great together. May you find peace at this terrible time with Lily. Jodi

Carrie~
I’m a fellow interpreter, not sure if you remember me….
I just wanted to say how sorry I am for your loss! I will keep you in my prayers (and Lily) at this horribly difficult time. My heart goes out to you!

my thoughts and prayers go to gutzwiller family

Oh Jay, how you were such the instigator. Why is it that after a day with you my husband always comes home with a Mo-hawk? Just last week it happened again! and now you aren’t here for me to give you crap about it. The last image i have of you is driving off in the truck, and i didn’t even stop to say hello.

Your wife and daughter are very strong, I know that because they get it from you. Your spirit and strength will live on through them. They will stay strong for you. As we watch Lily grow she will always be reminded of how great her father was and how he was too quickly stolen away from us. We will never forget.

My heart is with you all

To the Gutzwiller, Bongaarts and Jennissen family’s this is a very sad loss. May the strength of all of you help to ease the pain that you are feeling. All my memories of Jason bring a smile to my face. You are remembered Jason.

May the Gutzwiller, Bongaarts and Jennissen family’s gain the strength to deal with the tragic loss of Jason. My memories of Jason bring a smile to my face.

Sending my heartfelt sympathy to Jason’s loved ones. God be with you during this difficult time. Take care.

Our thoughts and prayers are with all of you!!

Perhaps they are not the stars, but rather openings in Heaven where the love of our lost ones pours through and shines down upon us to let us know that are happy. Author Unknown

Carrie and Lily, my heart goes out to both of you. I pray you will find strength and peace in HIS word. If there is anything I can do, don’t hesitate to ask.

You will be in my thoughts and prayers at this time of extreme loss and sadness for you.