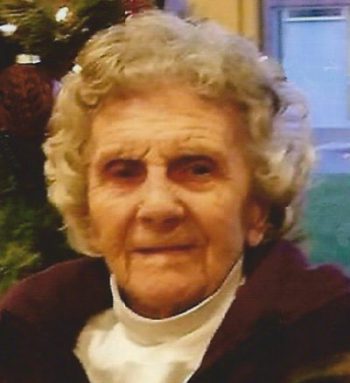 Services for Jean Konsor, age 97 of New Richmond, WI, formerly of Holdingford will be private.   Burial will be in Lakewood Cemetery in Minneapolis.  Arrangements are being made by the Miller-Carlin Funeral Homes.

Jean Chedzey was born to Walter and Ethel (Prothero) Chedzey, in Llanhilleth, Monmouthshire, South Wales.  She was joined by her sister, Pam, in 1937.

Jean worked for a local grocer, in her teen years, and joined the Women’s branch of the British Army (ATS), at the outbreak of WWII.  Jean was assigned to an army camp, near Hemel Hempstead, west of London.  Jean was in Hemel one evening, when the air raid sirens went off; Jean took shelter at the White Hart pub, as did a handsome young yank, John Konsor.  They were married in England on July 7, 1944, on a weekend pass.

Jean set sail for America in May, 1946, joined by thousands of other war brides.  John and Jean settled onto the home farmstead near Holdingford, Minnesota, and started their family.  Barry was born in 1948, Bradley Todd in 1959, and Janette in 1964.  During these years, Jean helped on the farm, and assimilated into life in rural Minnesota, while always maintaining her Welsh roots.  Jean was not your typical Minnesota farm wife, feisty at times, strong willed, independent in her own right, with a love for her family, and animals.  Jean always loved animals, to her dying day!

Jean & John settled intoTwin Cities suburban life in the late 60’s through early 80’s, raising Brad & Janette, and helping with John’s evening janitorial duties at Northwestern Bell.  After John retired, they returned to the farmstead near Holdingford.  They returned to Wales a few times during these years, and enjoyed their rural lifestyle, hosting family in the big old farmhouse.   John passed away in 1997, and Jean stayed on “The Farm” for several years, eventually spending winters with her children.   Jean took up residence at The Deerfield in 2012, close to her daughter, and best friend, Janette.

Jean passed from this world on October 23, surrounding by her loving family.

She was proceeded in death by her devoted husband John, her parents Walter and Ethel, her grandson Erroll, and her beloved dog Teisha.

Following Jean’s wishes, a private family gathering will be held, followed by entombment at Lakewood Cemetery, Minneapolis, alongside her husband, John.

Our Mum will be deeply missed.

Services will be private