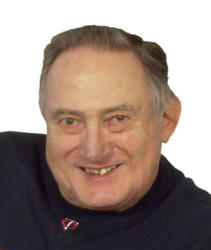 The Mass of Christian Burial celebrating the life of John T. Notch, age 74 of Luxemburg, will be 10:30 AM Thursday, December 1, at the St. Wendelin’s Catholic Church in Luxemburg.  Fr. Ron Weyrens and Fr. Mitchell Bechtold  will co-officiate and burial will be in the parish cemetery.  John died Sunday at the St. Cloud Hospital.  There will be a visitation from 4-8:00 PM on Wednesday, November 30 and again after 9:30 AM, Thursday at Mary Hall in Luxemburg.  St. Wendelin parish prayers will be at 4:00 PM Wednesday at Mary Hall.  Arrangements are being made with the Miller-Carlin Funeral Homes.

John was born February 18, 1942 in Duluth.  He was adopted by Al “Chuck” and Sophie (Boese) Notch when he was eight monthss old.  He grew up in Luxemburg and graduated from Technical High School.  He married Patricia “Pat” Toenjes on January 11, 1964 in Luxemburg.  John worked at the St. Cloud V.A. Medical Center for over 33 years.  He was the garage and grounds supervisor when he retired. John has also operated his own company, J&J Cleaning Service.  After his retirement, he volunteered at the VA as a driver for over 10 years.  John also worked with his son-in-law at Complete Automotive Repair Service (CARS) for 10 years, and he was the Caretaker at Kiffmeyer Park and Hidden Lake Park.  John was a member of St. Wendelin Catholic Church.

Memorials are preferred to the St. Wendelin School or Poor Clares.

The Mass of Christian Burial will be 10:30 AM Thursday, December 1, at the St. Wendelins Catholic Church in Luxemburg.

We are so sorry for your loss. We have fond memories of your father and will always remember his quiet sense of humor, great smile, and amazing popcorn!

Thinking of all of you!