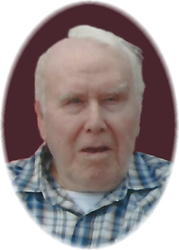 Mass of Christian Burial celebrating the life of Joseph H. Massmann, age 93, of Albany, will be at 11:00 AM on Tuesday, April 7, 2015 at Seven Dolors Catholic Church in Albany.  Father Brad Jenniges, OSB will officiate with Father John Sauer concelebrating and burial will be in the parish cemetery.  Joseph passed away peacefully on March 31st at Mother of Mercy Nursing Home Campus of Care in Albany.  Visitation will be from 4:00-9:00 PM on Monday, April 6, 2015 and again after 10:00 AM until the time of service Tuesday morning and will take place in the gathering space at church.  Parish prayers will be at 5:00 PM and the Knights of Columbus and St. Joseph Society will pray at 7:00 PM Monday evening.  Arrangements are being made with the Miller-Carlin Funeral Home in Albany.

Joseph Henry was born in March 15, 1922 in New Munich to Henry and Mary (Eickhoff) Massmann.  On August 31, 1948 he married Rita Sauer at St. Joseph Catholic Church in St. Joseph, Minnesota.  The couple farmed south of St. Cloud until 1952 when they moved west of St. Cloud.  In 1954 they moved to a farm north of St. Joseph and in 1962 they moved to the present farm north of Albany.  Joseph was a hardworking and dedicated farmer at heart.  He enjoyed working the ground to grow crops for his dairy cattle and their offspring.  Joseph also enjoyed teaching his family on the farm and taught them a strong work ethic.  In his later years of life when he retired from the dairy business, he continued to enjoy driving tractor for planting and harvesting the crops for this sons.  Joseph especially enjoyed driving the big tractor, plowing, and driving the self-propelled chopper and combine.  He was a member of Seven Dolors Catholic Church, Knights of Columbus, and St. Joseph Society.

Joe lived a full and good life of 93 years, with God and his family first, he was already ready to lend a helping hand to anyone in need and will be remembered as a hard working family man dedicated to everything he did.  Rest in Peace.

Joseph is survived by his children Larry (Dorothy) of St. Martin, Corrine (Dale) Hadrich of Avon, Duane (Ruth) of Richmond, Mary Jo (Joseph) Schlick of St. Martin, Janet of St. Cloud, Sandra of St. Cloud, Thomas of Woodbury, Teresa (Tim) Klaphake of New Munich, and Kevin and Roger of Albany; 22 grandchildren; and 17 great-grandchildren.  He is also survived by his brothers and sisters Marie (Richard) Dingmann, Felix, Daniel (Marge), and Catherine Buckheit all of Rockville; and sisters-in-law Jean Massmann of Luxemburg and Bernadine Massmann of Rockville.

A special heartfelt thanks of appreciation to the super great staff at the Mother of Mercy Campus of Care in Albany and Hospice for their great and courteous care of our Dad, Grandfather, and Great-Grandfather.

There will be a visitation for family and friendsfrom 4:00-9:00 PM on Monday, April 6, 2015 and again after 10:00 AM until the time of service Tuesday morning. Parish Prayers will be at 5:00 PM and the Knights of Columbus and St. Joseph Society will pray at 7:00 PM Monday evening.