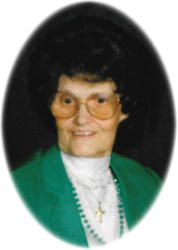 The Mass of Christian burial, celebrating the life of Katherine M. Funk, age 94 years, 9 months and 7 days, will be 11:30 AM, Friday, February 10th at the Sacred Heart Catholic Church in Freeport.  Burial will be in the parish cemetery.  Katherine died Monday, surrounded by her family at the Mother of Mercy Nursing Home in Albany.  There will a visitation after 10:30 AM, Friday at the church in Freeport.  Arrangements are being made by the Miller-Carlin Funeral Homes.

Katherine was born April 30, 1922 in St. Martin to Nicholas and Rose (Kollman) Moscho.  She grew up in St. Martin and married Anton “Tony” Funk on May 5, 1942 in St. Martin.  The couple settled on their farm south west of Freeport.  Katherine had a large garden where she grew flowers and vegetables;  she was very protective of her strawberries.  She also loved to bake and cook for her 11 children.  Katherine enjoyed visiting with people, playing cards, bowling and she especially loved spending time with her family.  She was a member of the Sacred Heart Catholic Church and the Sacred Heart Christian Mothers.

She is preceded in death by her parents, her husband Tony on December 4, 2006, and her son, Donald “Peter” Funk on March 23, 2001 and her brothers and sisters; Wilfred Moscho, Joe Moscho, Nicholas Moscho, Marie Klassen and Irene Schulzetenberg.

I am saddened to hear of Aunt Katherine’s passing.  I have fond memories from my childhood of her and the entire family.  What I remember the most were summer gatherings on the farm, running around outside, and the great food she would make.  Katherine was a fantastic cook.  Later in the evening we ate what amounted to a full second dinner and I thought that was the best thing ever.

I am certain she will be missed.

Ardell and Don, our sympathy,thoughts and prayers are with you on the passing of Mom and Mother n Law.

To all the Funk family,

Our deepest sympathy on the passing of your beloved mother.  May you all hold fond memories of her during happy times.

Our deepest symphathy on the passing of your beloved mother. May you remember her in happy moments.

Our thoughts are with you on the passing of Katherine.  She was a wonderful woman.  May you be surrounded with memories of many happy times together.