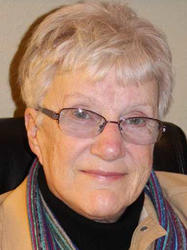 Services celebrating the life of Kathleen “Kathy” Sauer, age 76 of Avon, will be at 12:00 PM Thursday, February 15th at the Miller-Carlin Funeral Home Chapel in Albany. Kathy died Sunday peacefully at her home. There will be an hour long visitation from 11:00 AM until the time of the service at the funeral home.

Kathy was born October 30, 1941 in Brainerd to Robert and Florence (Zupan) Henkemeyer. She graduated from Stanbrook Hall High School in 1959 and attended the St. Scholatica Monastery before moving to St. Cloud where she met her husband of 52 years, Ervin Sauer. The two married on November 20, 1965 in St. Cloud. Kathy graduated from St. Benedicts School of Nursing and worked as an RN at the Milaca Hospital and the St. Cloud Manor. Kathy and Ervin moved to Princeton with their three daughters and together they built HDL, a hardware distribution company. After 16 years in Princeton, the couple moved to their lake home near St. Anna. In addition to being a continuous support to Erv, and raising her daughters, she devoted much of her time to serving others through ministry at St. Edward’s Catholic Church in Princeton, Immaculate Conception in St. Anna and St. Benedict’s Monastery. It was always her desire to share her passion for music and her devotion to the Church with others.

Kathy is preceded in death by her parents and her brother, Ken Henkemeyer.

There will be an hour long visitation from 11:00 AM until the time of the service at the funeral home on February 15th.

Scot and I were so sad to hear of the loss of your sweet and wonderful mother. Mary Beth has shared some wonderful sentiments about your mom. Truly, your family is blessed to have had her in your lives. Scot and I are so sorry that we will not be able to attend her service, as we will be out of town; however, we will be sure to send a donation to the Sauer Foundation in her honor. We wish you blessings and peace as you go through this difficult time. May you find great comfort in the wonderful memories she has given you.