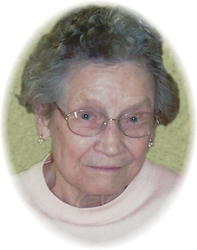 A Mass of Christian Burial celebrating the life of Kathryn Agnes Maciej, age 95 of Little Falls, formerly of Bowlus, will be at 10:30 AM Friday at St. Stanislaus Catholic Church in Bowlus. Burial will be in the parish cemetery. Fr. David Maciej will officiate. Kathryn died Sunday at St. Otto’s Care Center in Little Falls. Visitation will be from 4-8:00 PM on Thursday, and again after 9:30 AM, Friday, all at the church in Bowlus.

Kathryn was born April 28, 1919 in Swan River Township to Thomas and Emma (Koziol) Rudolph. She attended country school and graduated from Little Falls High School in 1937. Kathryn was united in marriage to Raymond John Maciej on September 9, 1941, at St.  Stanislaus Kostka Catholic Church in Bowlus. She and Ray farmed together on the Maciej family farm and raised their 5 children. They moved to Bowlus in 1983, and in later years they moved to Little Falls. Kathryn enjoyed gardening, especially flowers, crocheting, quilting, embroidery, cooking and baking. She was a member of St. Stanislaus Church, St. Francis Mission Circle, Bowlus American Legion Auxiliary, Daughters of Isabella, and the Rosary and Altar Society.

Funeral arrangements are with the Miller-Carlin Funeral Home in Holdingford.

Visitation will be from 4-8:00 PM on Thursday, and again after 9:30 AM, Friday, all at the St. Stanislaus Catholic church in Bowlus.

A Mass of Christian Burial will be at 10:30 AM Friday at St. Stanislaus Catholic Church in Bowlus.

Have a good time!

Mary, you and your family are in my prayers. I am so sorry for your lose.

My thoughts are with all of you … with happy memories of times shared with your mom and dad, at all the family gatherings.  I loved being around your mom … and I will miss her.

My prayers are for you and your family to find some happiness as you laugh and remember the treasured moments. May Gods arms be around you.