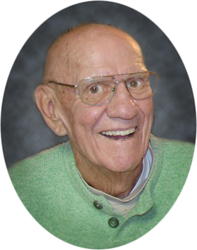 Mass of Christian burial celebrating the life of Keith F. Des Marais, age 90, of Albany will be
11:00 AM Monday, September 27, 2010 at St. Benedict’s Catholic Church in Avon.  Father
Blane Wasnie will officiate the service, and a private burial will take place the following day at
the Minnesota State Veteran’s Cemetery.  Friends may call from 10:00 AM until the time of the
service on Monday at the church.  Keith died peacefully Sunday morning at Mother of Mercy
Assisted Living in Albany surrounded by his family.  Arrangements are being made with the
Miller-Carlin Brenny Funeral Home in Albany.Keith was born June 13, 1920 to Marian (Hatcher) and Arthur Des Marais in Superior, WI.  He
grew up in St Cloud where he graduated from Technical High School.  He enlisted in the Navy and
served from 1943-1945 as a pilot in WWII.  Keith married Jean Lux on May 28, 1943 in Sisseton,
SD.  After marriage the couple moved to the Albany area where they owned the John Deere
Implement Dealership until retiring in 1985.  Keith was a life time member of the American
Legion Post 482, a lifetime member of the VFW, a 30 year member of the Albany Volunteer Fire
Department including a term as chief, the Albany Telephone Company past board member, a 50
year member of the Knights of Columbus, and a member of St. Benedict’s Catholic Church.Keith is survived by his wife Jean Des Marais, Albany; his daughters Mary Jean (John) Luethmers,
Albany; Karen (Sandy) Mac Intosh, Owatonna; Carol (Bob) Hallman, Brooklyn Park; his six
grandchildren, 7 great-grandchildren, and his sister Vivian Smith, CA.He is preceded in death by his parents, his brothers Ron, Ken, Floyd, and Dan; his sisters Merel
Rutter, and Inez Sauer; and his infant son David.

Friends may call from 10:00 AM until the time of the service on Monday at the church.

My wife and I have you in our thoughts and prayers.

May, I was sorry to hear of the loss of your father. Please accept my sympathy for you and your family.