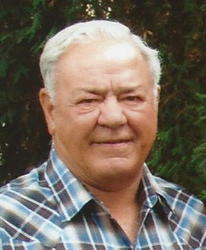 After 74 years of farming near Albany, Kenneth Krebs has passed away.  Every morning Ken would listen to the obituaries on the radio and tell his wife, “I didn’t hear my name so I guess we have to go to work.”  Now, Ken can rest.   To follow his wishes, services will be private with only his immediate family.  Arrangements are being made by the Miller-Carlin Funeral Homes.

Kenneth was born May 30, 1941 on the family farm in Albany to Ben and Anna (Solinger) Krebs.    He spent the rest of his living in that house and farming that very same farm.  He married Evelyn Majerus on February 16, 1963 in Sauk Centre, MN.  He was proud of his work as a farmer and had the wish to farm until the day he died and then have a quick and painless death.  His wish came true on Wednesday at the St. Cloud Hospital.   Besides his love for his home, he was very proud of his children and grandchildren and he enjoyed spending time with his family.  He also enjoyed a get away to a casino.  Ken was a member of the Seven Dolors Catholic Church and the St. Joseph’s Society.

He is preceded in death by his parents, his sisters, Doreen Gerads and Hazel Habiger and his grandson, Nicolas Krebs.

To follow his wishes, services will be private with only his immediate family.

So sorry for the loss of your father. Our thoughts and prayers are with your family.

We would like to extend our deepest sypathies to all of you.  I will always remember him as Uncle Kenny.  He had a beautiful smile.