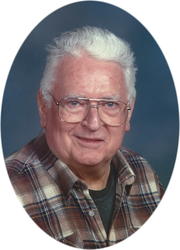 Funeral Services celebrating the life of LaVerne “Vern” Radtke, 85, of Albany, will be at 2:30 PM on Wednesday, July 27, 2016 at Our Savior’s Lutheran Church in Albany.  Pastor Steven Olson will officiate and a reception will follow.  In honoring LaVerne’s wishes, an immediate burial will be private.  LaVerne died peacefully at Mother of Mercy in Albany.  There will be a visitation one hour prior to services at the church.

LaVerne was born on July 15, 1931 to Emil and Myrtle (Yonke) on the family farm in Albany.  He grew up with a brother and sister and graduated from the local high school.  LaVerne joined the United States Army and proudly served his country for four years.  He earned the Good Conduct Medal and Sharpshooter commendation and was overseas during the Korean War.  LaVerne spent his entire life on the family farm which, in 2014, earned the designation of a Century Farm.  He was a dairy farmer and one of the first to modernize his barn with a milkline in the pipeline.  Although he was a quite person and enjoyed a bachelor’s lifestyle, family was very important to him and he enjoyed family gatherings.  LaVerne enjoyed fishing and always made sure there was time for it.  He was a member of Our Savior’s Lutheran Church and the Albany American Legion.

Left to remember LaVerne is his sister Marlys Burke of St. Cloud, his nephew Scott (Janet) Radtke of Albany, and other family and friends.

He is reunited in Heaven with his parents Emil and Myrtle, his brother Norman, and his brother-in-law Donald Burke.

Visitation will be from 1:30 PM until the time of the service Wednesday at the church.

Funeral Services will be at 2:30 PM on Wednesday, July 27, 2016 at Our Savior’s Lutheran Church in Albany. Pastor Steven Olson will officiate and a reception will follow. In honoring LaVerne’s wishes, an immediate burial will be private.

Our deepest sympathy on the loss of your uncle/neighbor.  Mary & Al Eisenschenk