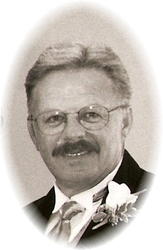 Services celebrating the life of Leon Smith, age 61 of Avon, will be 11:00 AM Thursday, October
6, at Bethlehem Lutheran Church in St. Cloud.  Burial will be in the Minnesota State Veterans
Cemetery, Little Falls.  Leon died Sunday at his home in Avon.  There will be a visitation from 4-8:00
PM Wednesday at the Miller-Carlin-Brenny Funeral Home in Albany and again after 10:00 AM
Thursday at the church.Leon was born May 7, 1949 in St. Cloud to Clarence and Rosemond (Voit) Smith.  He grew up in
Avon and then attended St. Cloud State.  He married Mary Adelmann on December 19, 1970 in
Glencoe.  Leon served in the U.S. Army from 1970 through 1971.  After his discharge from the
Army, Leon returned to St. Cloud State College and completed his degree in Business.  The couple
moved to Avon in 1978 followed by a move to Fargo in 1979.  The returned to Avon in 1982.  Leon
was a salesman for Smurfit-Stone Container in St. Cloud.  He was also a member of the Avon
Lions, the Albany Golf Club, the Juvenile Diabetes Research Foundation and the Veteran’s of Viet
Nam War.  He had a love for baseball since his childhood, he played amateur baseball for Avon Lakers
for over 25 years.  He was a 20 plus year season ticket holder to the SCSU basketball games.  He had
a deep loyalty to his community, a passion for his work, but most importantly, he cared about his
customers.  He had an endless devotion to his grandchildren.Leon is survived by his wife, Mary, Avon; his children; Jessica (Kristopher) Ling, Sartell and Adam
(Jacqueline Scherer) Smith, Richfield.  He is also survived by his brothers and sisters; David (Gail)
Smith, Avon; Patricia (Patrick) Barrett, St. Wendel; Ruth (Michael) Bauer, Forest Lake; Lisa (Uwe)
Itzke, Marquette, Manitoba; his sister-in-law, Margaret (Tom) Wiesner, Cedar Rapids, IA and his
two grandchildren.Leon is preceded in death by his parents, Clarence and Rosemond Voit, and his mother-in-law and
father-in-law, Richard and Luela Adelmann.

There will be a visitation from 4-8 PM at the Miller-Carlin Brenny Funeral Home in Albany on Wednesday, September 6 and again on Thursday after 10AM at Bethlehem Lutheran Church in St Cloud

Services celebrating the life of Leon Smith, age 61 of Avon, will be 11:00 AM Thursday, October 6, at Bethlehem Lutheran Church in St. Cloud. Burial will be in the Minnesota State Veterans Cemetery, Little Falls.

I did not know leon well in high school, but do remember him from some of the classes at tech. we had a very large class back then… my sympathy goes out to the family. He was way to young to pass on. deepest regrets.

My thoughts and prayers go out to Leon’s family and friends. We were classmates at Tech High School…class of “67.
God Bless you all!

Even though I lived in St. Cloud during high school, I spent a lot of time with classmates from Avon. Even then, Leon had a energy about him that indicated he would someday leave a positive footprint in the sand. He fullfilled God’s purpose for him, and so I celebrate his life. Be proud to have known him and may God continue to bless his family.

I have known Leon for many years both as a sales rep and a friend. He was one of the “good” guys.
His love of family is what endeared me to him. We would spend many of his visits to Tuffy’s just chatting about our families. His first comment was always “How are the kids doing?” He was a good friend and I will miss him. My thoughts and prayers are with you. May the good memories help you through this time.

Mary,
I am so sorry for your loss. Ruth just emailed the family. We will keep you in our thoughts and prayers.
God bless,
Sarah Adelmann Spanos

For the past 20 yrs Leon has been a part of our lives doing what he loved to do> SD pheasant hunting. He always had a joke to tell and great conversation. He will truly be missed. His family is in our thoughts and prayers.
Brenda Stokes