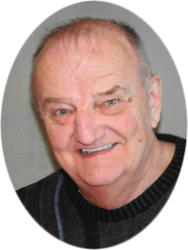 Mass of Christian Burial celebrating the life of LeRoy Blenker, 75, Albany, will be at 11:00 AM on Tuesday, September 6, 2016 at Seven Dolors Catholic Church, Albany.  Fr. Cletus Connors, OSB will officiate and burial will follow in the parish cemetery.  LeRoy passed away at Mother of Mercy Friday afternoon after a short but courageous battle against cancer surrounded by the love of his family.  There will be a visitation from 4:00-8:00 PM on Monday, September 5, 2016 in the Seven Dolors gathering space and again after 10:00 AM Tuesday until mass begins at the church.  Parish Prayers will be at 4:00 PM Monday evening at church.

LeRoy was born on June 8, 1941 to Leo and Theresia (Meier) Blenker in Albany.  He grew up with his sister and brother and graduated from Albany High School.  LeRoy served in the United States Army from 1963-1964.  He was married to Mary Stueve on June 3, 1967.  LeRoy loved spending time at the cabin with family and friends, playing cards and fishing.  He was an avid sports fan who could always tell you when the Twins played next or what the score was at the last Viking’s game.  LeRoy worked as a foreman at Stone Container in St. Cloud for over 30 years and belonged to the Albany American Legion and Seven Dolors Catholic Church.

LeRoy is survived by his wife of 49 years, Mary Blenker of Albany; his children Sandy Borstad (fiancé Tom Wochnick) in Avon; Jennifer Blenker (special friend Joe James) of St. Cloud; Todd (Cindy) Driver of Waite Park; his sister Mary Grund of St. Cloud; his brother Roger (Jan) Blenker of Avon; as well as many other family and friends.

He is preceded in death by his parents Leo and Theresia and his brother-in-law Jim Grund.