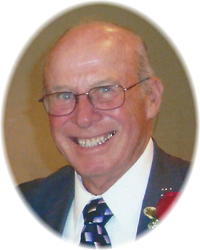 Mass of Christian Burial celebrating the life of Lloyd F. Fedor, 82, Holdingford, will be at 11:00 AM Monday, March 13, 2017 at the Church of All Saints – St. Hedwig, Holdingford.  Father Greg Mastey will officiate and burial with military honors will follow in the parish cemetery.  Lloyd passed away unexpectedly at his home Wednesday afternoon.  There will be a visitation from 4:00-8:00 PM Sunday, March 12, 2017 and again after 10:00 AM until the time of mass Monday morning at the church.  Parish prayers will be at 4:00 PM and the Knights of Columbus will pray at 7:00 PM Sunday evening at St. Hedwig’s.  Arrangements are being made with Miller-Carlin Funeral Home, Holdingford.

Lloyd was born on December 8, 1934 to Frank and Helen (Scegura) Fedor in Holdingford.  He attended a country school before graduating from Holdingford High School.  A few years later, Lloyd was drafted into the United States Army and stationed in Germany during Peacekeeping Time post WWII.  On July 6, 1959, he married Ramona Luethmers in St. Wendel and together they raised five children.  Lloyd’s passion was flying and it was his dream to become a pilot.  He achieved this in his 40s and enjoyed being a private pilot, flying recreationally, and took an impressive trip with his nephew to Seattle, WA and Canada.  Many people enjoyed the rides he gave in his Cessna 172.  Lloyd and Ramona worked their dairy farm until 1998, but he kept farming into his 80s, finally retiring in 2015.  Lloyd loved fishing, ice fishing/spearing, and water skiing.  He also liked to drive around his Model A and Model T antique trucks.  Lloyd was a generous and meticulous man of deep faith.  He was a member of a Saturday morning men’s prayer group and was very involved with his community.  Lloyd was a member of the American Legion and a 4th degree Knight.  He was an active member of St. Hedwig’s Catholic Church.

He is greeted in Heaven by his parents Frank and Helen and his sisters Lorraine Wentland, Janet Duitsman, and Irene, his infant sister.