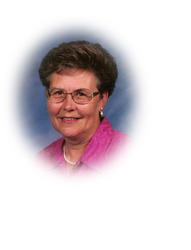 Lou Ann Peternell, 65Aug. 21, 1944-Sept. 26, 2009A Mass of Christian Burial celebrating the life of Lou Ann Peternell, age 65 of Albany will be 11 AM, Wednesday, September 30, 2009 at Seven Dolors Catholic Church, Albany. Lou Ann died surrounded by family and friends Saturday at the St. Cloud Cloud Hospital after suffering a massive stroke. Burial will be in the parish cemetery. Friends may call from 4-9 PM Tuesday & after 9:30 AM Wednesday at Seven Dolors Parish Center. Parish prayers will be at 4:30 PM Tuesday at Seven Dolors Parish Center followed by Seven Dolors Christian Mothers / Women praying a rosary. Arrangements are being made by Miller-Carlin-Brenny Funeral Home, Albany.Lou Ann was born on August 21, 1944 in Holdingford to Leo & Theresa (Bueckers) Frie. She attended Holdingford High School and graduated Valedictorian of her class. On August 19, 1963 she was united in marriage to John Peternell at St. Columbkille Catholic Church, St. Wendel. Lou Ann and her husband, John, started Pioneer Day’s in Albany in 1975. She has been in charge of registration for all of the exhibitors that came to the show each year. Over the years she has held many of the positions on the Board of Directors and also the Show Book Committee. She and her husband, John, owned Peternell Implement for over 40 years where she was the bookkeeper. She was also in charge of the Peternell Greenhouse and was looking forward to the Fleet Supply Store currently being built in Albany. She spent the last 12 winters with John in Mesa, AZ where they owned and operated a Hardware store and produce business. She was also a member of the Seven Dolors Christian Mothers / Women and started a quilting guild in AZ which now has over 100 members. Lou Ann enjoyed Pioneer Days, traveling, gardening and flowers, quilting, bowling, antiques, dolls and her friends and family.Lou Ann is survived by her loving husband of 46 years, John, Albany; sons, Mike (Marjorie), Avon; Bob, Holdingford; Dave (Angela), St. Stephen; Joe (Kristy), Albany; 5 grandchildren, Andrew, Richae, Brady, Bailey & KayLee, & siblings, Marc (Barbara) Frie, East Bethel; Bernard (Helen) Frie, St. Wendel; Alice (Chris) Redondo, Simi Valley CA; Bonnie (Gary) Konsor, Avon; Gerry (Sue) Frie, Litchfield; Roger (Elaine) Frie, St. Joe; & Clary (Patsy) Frie, Avon.She was preceded in death by infant son, Donald & her parents.The family requests that in lieu of flowers, donations be made to the Alzheimer Research Center, 640 Jackson Street, St. Paul, MN 55101.

The family requests that in lieu of flowers, donations be made to the Alzheimer Research Center, 640 Jackson Street, St. Paul, MN 55101