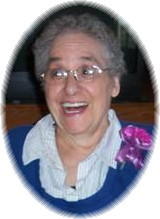 The Mass of Christian burial, celebrating the life of Lucille A. Lemke, age 78 of Sartell, formally of Albany, will be 10:00 AM on Monday, December 9th at Seven Dolors Catholic Church in Albany.  Fr. Michael Naughton, OSB will officiate and burial will be in the parish cemetery.  Lucille died, surrounded by her family, Wednesday at the Country Manor Nursing Home in Sartell.  There will be a visitation from 4-8:00 PM Sunday and again after 9:00 AM Monday at the Miller-Carlin-Brenny Funeral Home in Albany.  Parish prayers will be at 4:00 PM and the Christian Mothers will pray the rosary at 6:00 PM Sunday at the funeral home.Lucille was born May 13, 1935 in Pierz to William and Florence (Perusse) Altenhofen.  She grew up in Pierz and then worked as a nanny in the twin cities where she met Jerome Lemke.  The two were married on June 11, 1954 in Mitchell, SD and they settled in Albany.  Lucille was an Avon Lady and she tended bar at the “Night Owl” in Albany until she became sick in 1981.  She was a feisty woman who had a good sense of humor.  She enjoyed playing Bingo and Farkle with the others at Country Manor.  Lucille was a member of the Seven Dolors Catholic Church in Albany and a former member of the Seven Dolors Christian Mothers.Lucille is survived by her children, Mike Lemke, St. Cloud; Pat (Lynn) St. Cloud; Bill (Brenda) Lemke, Melrose; Cheryl Nieman, Rockville, Tim (Mary) Lemke, CA; Greg (Corinda) Anaheim, CA; JoAnn (Steve) Boelz, St. Cloud; Charlie (Lisa) Lemke, Melrose; 16 grandchildren and 12 great-grandchildren.  She is also survived by her brothers and sisters, Betty (Ron) Fyten, Pierz; Art (Jeanette)Altenhofen, Robbinsdale; Willie (Sam) Altenhofen, St Paul Park; and Jerome Altenhofen, Hopkins.Lucille is preceded in death by her parents, her husband, Jerome on August 14, 2008, her brothers, Leander Altenhofen, Charles Altenhofen, Vernon Altenhofen; and three grandchildren, Angela Marie Lemke; Sara Marie Lemke and Micah John Lemke.

There will be a visitation from 4-8:00 PM Sunday and again after 9:00 AM Monday at the Miller-Carlin-Brenny Funeral Home in Albany. Parish prayers will be at 4:00 PM and the Christian Mothers will pray the rosary at 6:00 PM Sunday at the funeral home.

As the cold December winds began to blow in Minnesota, the wind carried high into the heavens, and God decided it was time for some wonderfully warm wool mittens. He said to himself, “There is no one better for this task than my dear child, Lucy Lemke.” And so, our Heavenly Father called my Aunt Lucy home to heaven on December 4, 2013, where He and my Uncle Jerry waited with open arms for her. May she rest in peace and delight in her first Christmas in Heaven. To my cousins, may many memories, such as those warm woolen mittens, warm your hearts and see you through the coming days.