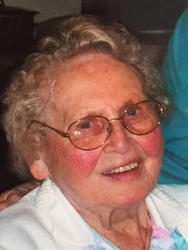 Mass of Christian Burial celebrating the long life of Lucille Meier, 100, Holdingford, will be at 11:00 AM on Tuesday, November 22, 2016 at the Church of All Saints – St. Mary in Holdingford.  Father Greg Mastey will officiate and burial will follow in the parish cemetery.  Lucille died peacefully Saturday evening at Mother of Mercy, Albany.  Family and friends will be received after 10:00 AM until the time of the service at the church.  Arrangements have been entrusted to Miller-Carlin Funeral Home of Holdingford.

Lucille was born on March 30, 1916 to Joseph and Katherine (Koska) Kollodge in Holdingford.  She grew up one of 15 children on the family farm and attended the local school through 8th grade.  In 1946, Lucille married Roman J. Meier in Holdingford and together they had a son and a daughter.  Lucille lost her husband at a young age after 19 years of marriage and was left to raise two young children.  She was a homemaker and did her best to make the house a home, to care for her family, and to raise the children.  Lucille later worked in the school as a paraprofessional.  She was an avid and accomplished bowler.  Lucille appeared on WCCO’s Bowlerama numerous times where she won various prizes such as a bicycle built for two, jewelry, and furniture.  She was a lifelong member of the St. Mary’s Church in Holdingford.

Lou was a remarkable woman and she lived a good and remarkably long life.  But am sure that at this point she is much happier to be with Roman and the dear Lord.  May she rest in peace.   My sincerest sympathies to her family and may they find peace and comfort in knowing that she is with the Lord.  I will not be able to attend her funeral but I also would like to offer the sympathies from all of the Moonen family.   God be with you all.

My sympathy to you and your family!!

Bless her heart, she is at peace!