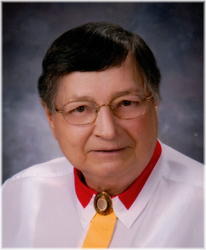 Mass of Christian Burial celebrating the life of Marcia Mary Weber, age 84, of Albany, will be at 11AM, Thursday December 12, 2013 at Seven Dolors Catholic Church in Albany.  Father Michael Naughton, OSB will officiate and burial will take place in the parish cemetery immediately following mass. There will be a visitation from 4-8 PM Wednesday, December 11th, at the Miller-Carlin Funeral Home in Albany and will continue on Thursday at the Seven Dolors Catholic Church 1 hour prior to the service. Memorial Services will be provided by the Christian Mother’s Society and the American Legion Auxiliary beginning at 7 PM on Wednesday, December 11th.Marcia was born on December 30, 1928 to Warren and Regina (Gans) Weber in St. Cloud, MN. Marcia passed away peacefully under hospice care at The Legends of Heritage Place in Sartell on Saturday, December 7th. She attended St. Cloud Hospital School of Nursing and became a registered nurse in 1950. She worked from 1950-1959 at the Charles T. Miller Hospital in St Paul; from there she spent 6 years as a Registered Nurse in Casper, WY. Her time in the nursing field involved caring for newborn and premature babies.From 1965-1976, Marcia’s mother worked as the Stearns County Coordinator on aging, establishing new groups of senior citizens in their home areas. Marcia provided transportation for her mother’s organization by taking her everywhere she needed to go.Marcia was a past President of the Albany American Legion Auxiliary, and was awarded the State Auxiliary Unit Member of the year in 2006. Marcia was very well known for the time she devoted to both the Poppy and Daffodil flower sales.Marcia spent over 20 years in volunteer service in the Pharmacy Department at the Veteran’s Administration Hospital in St Cloud, accumulating over 5,000 volunteer hours. She was an active member of Seven Dolors Catholic Church and a member of Christian Mother’s Society. Marcia was elected a member of the School Board as well as the Albany City Council.Marcia is survived by her brother, Paul (LaVonne) Weber, Le Center and many nieces, nephews, and friends. She was preceded in death by her parents Warren and Regina Weber, infant sister, Mary; brother, Warren (Marian) Weber, sister Elizabeth (Richard) MacDonald, and nephew David Weber.

Visitation will be 4-8:00 PM Wednesday at the funeral home and again one hour prior to the services, Thursday morning at the church

To my Aunti Marce: There are so many words that I could use to describe you and the many ways that you touched my life. Generous, loving, funny, caring, and the list could go on. I have fond memories of our family reunion and when you pulled into the cabin’s drive and opened your trunk only to find cases and cases of Shasta (which was my favorite pop!!!). Or a Christmas when I wanted nothing but a baby doll and I got a sock monkey doll instead from my Aunti Marce and it became the most important thing in the world to me. I love sock monkies today because of that Christmas and always cherish the warmth I feel when I find one that looks so similar to the one that you gave me. The times that I would be able to physically see you and hug you and you would give me that hard pat on the back and say “ok”. Through it all, I may have loved that monkey or enjoyed that Shasta, but it was always so much better becase it was from you and the love and caring you put into each and everything you did every day for everyone else. And i know that you and Mom are up there in Heaven right now talking and picking at each other as you always did, and I know that you both are loving everying moment of it. God’s speed Auntie Marce and know that are forever in my heart. With all my love.

Auntie Marce was my God Mother, my Aunt and someone I loved more than words can ever be written here.
Marcie always had plenty of laughter, wasn’t afraid to set us six kids right, loved with a heart bigger than anyone else I know. Not one of us failed to recognize that if it weren’t for our Auntie Mouse the MacDonalds would not have had Christmas. She took the time to wrap even the smallest of gifts and always made that so special for us. I can remember the excitement of getting the boxes in the mail! How each of us didn’t dare touch those packages that said: DO NOT OPEN UNTIL CHRISTMAS. It made the anticipation of her sweet effort all the more precious to us. Even more important was the love she gave us. The joy and love she always brought with her is unforgettable.
Auntie Marcie, God’s heaven is such a sweeter place because you are there. You get to be close to St. Nick and the Baby Jesus for Christmas. We love you and will miss you!