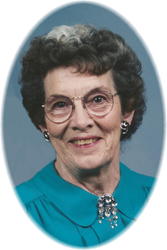 Private memorial services, celebrating the life of Margaret “Peg” Fingarson, age 87 of St Cloud will be held at a later date.  Peg died Sunday morning at the Quiet Oaks Hospice in St Augusta.   Burial will take place at the Minnesota State Veteran’s Cemetery in Little Falls.
Peg was born February 25, 1923 at home in Miller, South Dakota to John and Agnes (Hoban) Bergstrom.  She grew up in the South Dakota prairies where she rode horse to country school.  The family moved to Minnesota when she was 10 years old. After the family moved to Minnesota, she finished her schooling, graduating from Austin High School in 1940.  She married Orville Fingarson on December 27, 1945 in Austin Minnesota, where the couple lived until moving to St Cloud in 1992.  Peg worked as a grocery store clerk at Red Owl for many years.  After Orville retired, they spent many winters in Mesa, AZ and made many friends from the across the U.S and Canada.
Peg is survived by her children Richard (Kathy) Fingarson, St Cloud; Randy (Linda) Fingarson, Chanhassen; Brenda (Steve) Knowlton, Lakeville; and Diane McAfee, Blaine; 7 Grandchildren and 10 Great Grandchildren.  She is also survived by her sister Mary (Benno) Bissen, Austin.  She is preceded in death by her husband Orville, her parents, her sister Katherine Schlottman and her brother Norbert Bergstrom.Peg’s family would like to express their sincere appreciation to the wonderful and caring staff at Quiet Oaks Hospice who cared for their mom as well as them during their mom’s illness.

I am so sorry to hear about Peg. I enjoyed working with her in Home Care. She had a sassy attitude and kept on plugging along. She will be missed! God bless you in this difficult time.

Rich, Randy, Brenda and Diane and families: My heartfelt condolences to all of you during this most heart wrenching time. Mom wrote yesterday to tell me that Aunt Marg was in hospice and not doing well. I had planned to take a day and go see her this week only to learn from Monica that she had already left this earthly plain. I wish I had had the chance to hold her hand and tell her how many fond memories I had spending time as a kid with her and Uncle Orv. Seemed my folks saw them weekly thruout much of my childhood. I remember the conversations they had over Old Milwaukee and the laughter that was shared. Aunt Marg used to be my penpal in recent years after Uncle Orv died. I always looked forward to her letters. She always asked about Sage, my job and what I liked to do. She told me her house seemed too big for her sometimes with Orv gone. I’m glad we made that connection. I regret not being able to tell her goodbye. I love you guys. My prayers are with you. May she continue to live on in the hearts of all who loved her. xxo Cousin Lori

Rich, Randy, Brenda & Diane: My thoughts and prayers are with you all and your families during this difficult time. I remember lots of good times spent at your house here in Austin when we were all growing up. Lots of get togethers and fun times. Your dad and mom always made a get together fun.

I told my mom, when she called to tell me about Aunt Marg, that she was now in Heaven with my dad and Aunt Katie and their parents. She is at peace.

We so enjoyed doing Pegs Hair throughout the Years!Such a nice caring person.She will be missed by everyone!Our Sympathy to all of the family

Dear Cousins,
I send you my heartfelt wishes of sympathy. I know Marg’s health was declining recently, and I have thought of her and you all very often, as it can be so difficult at times, knowing a parent is in need, yet helping them still to uphold their independence. The road is not easy, but we do what we can, and that’s what family is all about. You are such an awesome family and your Mom was very lucky to have you by her side through it all. At a time like this memories seem to flood the mind, and I think of all the times spent in your back yard in Austin, the reunions, and your Mom and Dad’s distinct laughs! We can only hope they are in a more vibrant place, where there is no more suffering. Take good care of yourselves!

Dear Rich, Randy, Brenda, and Diane,
I read about your mother’s death in the St. Cloud Times. I wanted to let you know how often I think fondly about Austin and our old neighborhood. Your mom and dad were special friends of my parents, Esther and Clint. They both came to my mother’s funeral in Arizona in 1990. I remember watching “Dark Shadows” without fail, with Diane. I think about Rich and Kathy’s wedding when we came from the campground to celebrate with you. I could go on and on with great memories… Just wanted you to know that I remember your parents so very well and wish you all the best.
Sincerely, Judy (Johnson)

I am sorry for your loss. I will keep you and your families in my prayers.