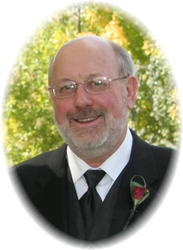 Funeral services celebrating the life of Marlin Fisher, 67, of Paynesville, will be at 1:00 PM on Friday, November 14, 2014 at the Miller-Carlin Funeral Chapel in Saint Cloud, MN.  Chaplain James Neppl will officiate and burial will take place at 1:00 PM Saturday at Fairview Cemetery in Fairmont, MN.  Marlin was unable to recover after a second stroke and died Sunday, November 9th at Regions Hospital in St. Paul.  There will be a visitation after 12:00 Noon on Friday until the time of service at the funeral home.

Marlin was born November 15, 1946 to Roy and Alice (Laue) Fisher in Fairmont, MN.  He was a private, easy-going man who valued friendship.  Marlin enjoyed being outdoors, gardening, hunting, fishing, and snowmobiling.  He worked as a Quality Control Manager, but loved livestock and working the farm in rural Brooten. Marlin enjoyed tinkering and was very handy.  His attention to artistic detail ensured that his log home was completed to his own high standards.

He is preceded in death by his parents Roy and Alice.