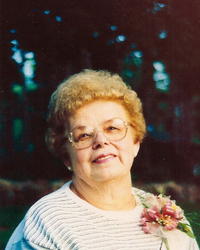 MARTHA I. WILKESAugust 6, 1925 – December 19, 2010Services celebrating the life of Martha I. Wilkes, age 85 of Sartell, formerly of Walker, will be 1:00 PM Wednesday, December 29 at Hope Lutheran Church in Walker. Martha died Sunday at the Country Manor Health Care Center in Sartell. There will be a visitation one hour prior to the services at the church in Walker. Arrangements are being made by the Miller-Carlin Funeral Home in St. Cloud.Martha was born August 6, 1925 in McGregor, MN to Emil and Emmy (Bylund) Swedberg. She grew up in McGregor and married Max Wilkes on March 1, 1947. The couple moved to Walker where Martha lived until moving to St. Cloud in 2003. Martha worked in the Auditor and Treasure’s offices of the Cass County Courthouse for over 15 years, retiring in 1990. She was a member of Hope Lutheran Church in Walker.Martha is survived by her children; Linda (George) Asadourian, Forest Lake; Lois Gwynn, St. Cloud; Loren (Lynn Bieri) Wilkes, Arden Hills, and Lea (Mark) Reinke, Phoenix, AZ. She is also survived by her sister, Ruth Maijala, Tamarack, MN; 9 grandchildren and 5 great-grandchildren.She is preceded in death by her parents, her husband, Max; her brother, Elmer Swedberg; her grandson, Dean Collins; and her son-in-law, John Folkestad.Memorials are preferred to the Country Manor Health Care Center Chapel

Friends may call after 12:00 Noon on Wednesday, December 29, 2010 at Hope Lutheran Church in Walker

How strange to be sending sympathy via the internet, but in lieu of being there to give you a big, bear hug please know my thoughts and prayers are with all of you.

God bless you and your Mom,

I have many wonderful memories of Martha and the little house on the hill in Walker. She was so incredibly patient with all of us neighborhood kids when we would visit the little house to play, or to listen to records.
The Wilkes’ move to their Lake May house ended a chapter in the story of our old neighborhood, but started a whole new chapter for their second neighborhood. The Swensons, Van Vickles, and Steadlands were the fortunate recipients of the newcomers’ hospitality, sharing several years of mixed joys and sorrows. Martha and Max raised a wonderful family, so she leaves behind the most beautiful legacy of all… the gift of allowing us to share the pleasures of knowing her children. You did great, Martha!
My thoughts and prayers are with the entire Wilkes family.
Jan

I have many fond memories of Martha from the early days in the old neighborhood to more recent years taking the Lake May road to Tianna. My deepest sympathy to the entire Wilkes family.
Jeff Wallin