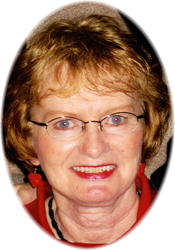 Mass of Christian Burial for Mary Lou Dinndorf, age 69, of Blaine formerly of Albany, will be at 10:00 AM on Friday, March 8th, 2013 at Seven Dolors Catholic Church in Albany. Father Michael Naughton will officiate and burial will take place in the parish cemetery following the service. Mary Lou died late Sunday night at Mercy Hospital surrounded by her son and daughter. There will be a visitation from 4:00-8:00 PM on Thursday, March 7th at Seven Dolors Catholic Church in Albany and again after 9:00 AM until the time of service on Friday, March 8th at the church. Arrangements are being made with Miller-Carlin-Brenny Funeral Home in Albany. Mary Lou was born on December 10, 1943 in Melrose to Edwin and Levina (Moening) Thull. She grew up on the family farm with her two brothers and spent a lot of time with her cousins. After high school, Mary Lou married Martin John Dinndorf and together they raised two children in Albany. She had a sweet disposition and a positive outlook. Mary Lou seldom complained and gave selflessly to others. She enjoyed line dancing, playing cards, and was a big Twins fan. Mary Lou was known for her baking, especially her french silk pies and spritz cookies. She loved being a part of the Monthly Dinner Group and traveling with her “cruzin’ buddies” Becky, Jeanette, and Rosie, and her family. Mary Lou spent her career as a legal assistant at Meyer, Meyer, and Pottratz in Melrose before retiring in 2006. Mary Lou is survived by her children Dean (Dana) Dinndorf, Welch; Gina (Greg) Pfeifer, Andover; her brothers Leroy (Dorothy) Thull, St. Cloud; Melvin Thull, St. Cloud; her grandchildren Kelsey, Alex, Kayleen, Jackson, and Emma; her in-laws Marilyn (Marty) Ritter, Joanne (Greg) Johnson, David (Darlene) Dinndorf, Ann Marie (Wayne) Spanier; her nieces, nephews, and many friends. She is preceded in death by her husband Martin in 1987; her parents Edwin and Levina Thull; and an infant granddaughter Katelyn Pfeifer.

There will be a visitation from 4:00-8:00 PM on Thursday, March 7th at Seven Dolors Catholic Church in Albany and again after 9:00 AM until the time of service on Friday, March 8th at the church.

Mass of Christian Burial for Mary Lou Dinndorf, age 69, of Blaine formerly of Albany, will be at 10:00 AM on Friday, March 8th, 2013 at Seven Dolors Catholic Church in Albany. Father Michael Naughton will officiate and burial will take place in the parish cemetery following the service.

Gina and family,
Your Mom is at peace. She has had many struggles of late, but what a great source of love and compassion you were to her. You are in my prayers.

So sorry for your loss. Our thoughts and prayers are with your family.

Dean and Dana,
We are so sorry to hear of the loss of your Mother. Our sincere and deepest Sympathy to you both. Our prayers and thoughts are with you and your family.

Dean, Dana & all Family….may God’s love comfort you as you grieve the loss of your mother/grandmother/loved one…. may the memories of her live long in your hearts. You are all in our thoughts and prayers.

God’s blessings on Mary Lou’s loved ones as you grieve her loss and celebrate her life. Peace and sympathy.

So sorry to hear about the loss of your mom. She was a wonderful person and I enjoyed her company. Thoughts and prayers to you.

Greg, Gina, Alex and Jackson,
You know that we will be thinking of you in these hard days. You were a great source of joy for your Mom/Grandma as you shared your life with her. She was so lucky to have you call her Mom/Grandma. Wrap your special memories around your heart and keep them close in the days ahead.
We love you.

Gina,
Oh, how you will miss your Mom. But, she finally gets to be with your Dad, how nice is that!
Remember to let your friends help, they are there for you anytime.

Dean and Dana… so sorry to hear about your Mom. Our thoughts and prayers are with you and your family during this difficult time.

Dean, Gina and families
Our Hearts and Prayers go out to you during this time of sorrow.

We were so sad to hear of MaryLou’s passing. I have so many good memories of her when we lived as neighbors in Albany. She was always a good friend and a good person. I will always remember her as a lovely girl who truly cared for her family. David and Kent have many good memories of being at her home and spending their early years with Dean and Gina. We just want you to know that we are thinking of all of MaryLou’s family and sending our love and sympathy. Jane and David and Kent

I worked with your mother in Melrose at the law offices for several years. She was one of the sweetest, kindest, friendliest and most sincere co-worker’s anyone could ever work with. In fact, just last week I was looking through old pictures and found one with her, I and Rita Ritter. We were all smiling. She was a great lady and I am honored to have known her. My condolences to you and your families.

Our deepest sympathies in the loss of Mary Lou! I met Mary Lou after my husband passed away, and then found out that she only lived two blocks from my kids and I!! I have many wonderful memories of “talks” we had, and going out dancing! Mary Lou, you are loved and very much missed! Our deepest sympathy to your family!

May the power of the Lord shine down on you so that you may find peace during this tragic time. Your family is in our thoughts and prayers.

Mary Lou was such a wonderful and sincere person, and we have such good memories of her. We were so sorry to hear of her passing. We knew her from her work with the law office in Melrose, and also when Levina and our Grandma Mary Osendorf were roommates at Mother of Mercy Nursing Home. We all enjoyed visiting there together. May you find comfort in the many treasured memories of your Mom.