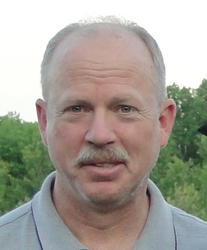 Services celebrating the life of Matthew James Skwira, age 50 of Rice, will be 11:00 AM, Monday at the Community Church in Holdingford, burial will be in the Minnesota State Veterans Cemetery. Little Falls.  Matt died from injuries in a plane accident on Tuesday.  There will be a visitation from 2:00-6:00 PM, Sunday, and again after 10:00 AM Monday, at the church in Holdingford.  Arrangements are being made by the Miller-Carlin Funeral Homes.

Matt was born October 2, 1967 in St. Cloud to James and Alice (Brinkmann) Skwira.  He lived his entire life in the Holdingford area, with the exception of his time in the U.S. Marine Corps.  He married Charlotte “Char” Spiczka on April 26, 1997 in Sauk Rapids.  The couple owned Duckwood Prefinishing and Painting in Rice and Matt worked for Talon Innovations in Sauk Rapids. He was a man of many hobbies and talents.  He was a man of great patriotism.  Matt took much pride in our country and was a man who stood up for what he believed was fair and honest; he would not be swayed.  He loved to debate and spent many hours studying his interests.  He loved the outdoors, whether he was picking mushrooms, hunting, or fishing.  He enjoyed his time on the school board where he fought for what was right for the kids, even if it wasn’t popular He had an avid love of flying and he even built his own plane from scratch.  He was an experienced pilot with over 10 years of flying.  Matt was a member of the Stearns County Community Corrections Advisory Board, and the Bowlus Legion.  He served on the Holdingford School Board for over 8 years and he is an alumni of the Holdingford FFA.

He is preceded in death by his father, and Char’s parents, Rosemary and Paul Spiczka.

Services will be 11:00 AM, Monday at the Community Church in Holdingford