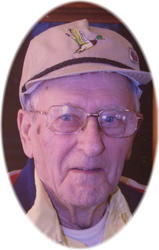 The Mass of Christian Burial, celebrating the life of Paul Gerads, age 87 of Albany (formerly Upsala and St Francis) will be 3:00 PM Saturday, March 13 at St. Francis of Assisi Catholic Church in St. Francis, MN.  Paul died Thursday at the Mother of Mercy campus in Albany.  There will be a visitation at the church in St. Francis from 1:00-2:00; memories and sharing at 2:00; followed by the Mass at 3:00, light dinner after interment in the parish cemetery.Paul was born August 19, 1922 in Krain Township to Martin and Mary (Roettger) Gerads.  He graduated from the Upsala High School in 1940.  He served in the U.S. Army during WWII in the 10th Mountain Division in Italy.  During his time in the Army, he received letters from a pen pal, Cecilia (Ceil) Scepaniak.  Paul married Ceil on August 13, 1946 in St. Hedwig’s Catholic Church in Holdingford; they were married for 64 years.  Paul worked as a carpenter and did many remodeling and repair projects around the area. He was a lifelong resident of the Upsala and Holdingford area. He enjoyed building things and made each of his children a grandfather clock.  Paul loved going fishing, smelting and hunting “up north” at the deer shack.  Paul and Ceil loved traveling to Canada, New Mexico, Florida and Alabama.  They co-owned P & C’s Attic in St Francis for 18 years.  Paul’s faith was important to him; he was a member of the St Mary’s Catholic Church in Upsala and St. Francis of Assisi, the Upsala American Legion, the Holdingford VFW, the Catholic Aid Association, and the Knights of Columbus.Paul is survived by his wife, Ceil Gerads, Albany; his 8 children; Arlene (Dick) Perlinger, Swanville; Jim Gerads, St. Francis; Al (Beverly) Gerads, Rice; Betsy (Marty) Mahowald, St. Cloud; Joan (Dennis) Sand, Albany; Helen (Greg) Clark, Punta Gorda, FL; Kathy (Bob) Head, Punta Gorda, FL and Trish (Jeff) Johnson, Avon; 14 grandchildren and one great-grandchild.  Paul was the eldest of 9 children, and is also survived by his brothers and sisters: Theresa (Jim) Fakler Allen, Albert Lea; Sr. Joan Gerads, OSF, Cumbaya, Ecuador; Veronica (Enrique) Salazar, Fort Meyers, FL; Greg (Dorothea) Gerads, Holdingford; Martin (Ginny) Gerads, New Hope.   Paul is preceded in death by his parents, his brother, Hubert Gerads and his sisters, Eleanor Gerads and Sr. Bertha Gerads, OSF, his daughter-in-law, Nancy Gerads, and his infant grandson, Joseph Sand.   Memorials are preferred to the Parish Neighborhood Renewal Ministry for Sister Joan Gerads, OSF, a missionary in Ecuador for over 35 yrs.

Memorials are preferred to the Parish Renewal Ministry for Sister Joan Gerads, OSF.

My Sympathy to the Gerads family!

My sincere condolonces to your family. I never had the opportunity to meet Paul but by knowing Trish I know he was great man. Our prayers are with you.

Our Sympathy to you!

My sympathy to all of the family at their loss. I recall how Trish always described her parents and their active lives when I worked with her and I almost felt like I knew them too. I know how much he will be missed.