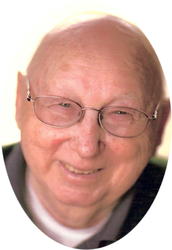 The Mass of Christian Burial, celebrating the life of Paul P. Herges, age 92 of St. Cloud, will be 1:00 PM, Monday, December 19 at St. Mary’s Cathedral Upper Church in St. Cloud.  Burial will be in Assumption Cemetery.  Paul died at his home in St. Cloud on Thursday, with his family by his side.  There will be a visitation from 4-8:00 PM on Sunday and again after 11:00 AM Monday at the Miller-Carlin Funeral Home in St. Cloud.  St. Mary’s parish prayers will be 7:00 PM.Paul was born March 1, 1919 in St. Martin to John and Mary (Doll) Herges.  His father died when Paul was an infant and he was sent to St. Johns Prep School.  He was greatly influenced by the priests and several became life long friends. Paul loved baseball.  He was a star in high school for St. Johns Prep and played amateur baseball for more than 20 years.  He made numerous all-star teams He was a player/manager for many of those years.  Paul graduated from St. John’s Prep School, The University of Wisconsin School of Banking and was a graduate of the Realtors Institute.  Paul was an entrepreneur at an early age.  He had his own business in St. Martin at the age of 21.  He married Rita Kolb on November 6, 1947 at St. Mary’s Cathedral in St. Cloud.  The couple were by each others side throughout their 64 years of marriage.  Paul was Past Executive Vice-President of the First National Bank of Kilkenny from 1954-1963 and was a founder and organizer of the St. Martin National Bank in 1962.  He organized Herges Realty in 1969, which later became Coldwell Banker Herges Realty, where he was involved until he retired in 1994.  Herges Realty was one of the original members of the St. Cloud Multiple Listing Service (MLS) and he served as the President of the St. Cloud Board of Realtors in 1976-1978 .  In 2000, he received the highest honor given to realtors, the Life Time Achievement Award.   Paul took special pride in being recognized as the Father of the Wheels, Wings and Water festival in St. Cloud.  He served on the St. Cloud City Council from 1978-1986.  He was Grand Knight for the Knights of Columbus Council 961,  President of the Serra Club in 1984 and 1986, and member of the St. Cloud Board of Realtors and SCORE.   He received an Honorable Citation from the Wold Architecture Firm, St. Paul for serving on the planning and design committee of the Stearns County Law Enforcement Center.  He was a member of St. Mary’s Cathedral where he was a lectern for 14 years, the St. Cloud Lions Club, Knights of Columbus, the Catholic Order of Foresters and the St. Cloud Eagles.  Paul will be remembered as a quiet man who enjoyed his comic bantering with others.Paul is survived by his wife, Rita, St. Cloud; his children; John (Mary Pat) Herges, St. Cloud; Fred Herges, Sartell; Julie (Titus) Calasanz, Houston, TX; Patty (Rob) Stomberg, Blackduck; Bob (Renee) Herges, Cold Spring; and Heidi (Kevin) Hall, Clearwater.  He is also survived by grandchildren: Dylan Herges, Christopher Herges, Seth Stomberg, Adam Herges, Brett Herges, Anna Stomberg, Emily Calasanz, Jake Herges, and one great-grandchild Violet Herges.Paul is preceded in death by his parents, his sisters, Rose Mohs, Gertrude Wehseler, Mina Tholl, brothers, Edmund Herges, Math Herges and Eugene Herges.The family would like to thank the staff at Home Instead Home Health Care, as well as the St. Cloud Hospital Hospice for the excellent care given to PaulIn lieu of flowers, memorials are preferred to the Dr. Doreen Keable Learning  Resource Center Memorial Scholarship Foundation at St. Cloud State University and can be sent to Alumni House c/o St. Cloud State University – 720 Fourth Avenue South, St. Cloud, Minnesota 56301.

There will be a visitation from 4-8:00 PM on Sunday and again after 11:00 AM Monday at the Miller-Carlin Funeral Home in St. Cloud. St. Marys parish prayers will be 7:00 PM.

Our prayers are with all Paul’s family. May God comfort all of you.

So sorry to hear about Uncle Paul. He was always so delightful as is Aunt Rita. Im sure it is especially hard this time of year and so soon after their 64th anniversary. Please give Aunt Rita my love and condolences. I will be thinking of you all.
Peace and Love,
Alan LaFleur and family

Hi, I grew up in Cold Spring and during the 1940’s I worked at Peters Market and was in High School at that time. Paul was in the Meat Dept and most friendly person one could ever know. Always the type of smile on his face that said, “watch out, Paul is up to something”. I did a lot of grocery delivering and made many a trip to the Herges home, just south of Peters Market.
In the early 50′ during the Korean Conflict, I was drafted.
I was discharged in 1954 and went to work with The American Tobacco Co in sales. One day calling on accounts in Foley, there was Paul…same smile, he now owned that establishiment.
Nice Man. My sympathies and Good luck to all of you. Norm