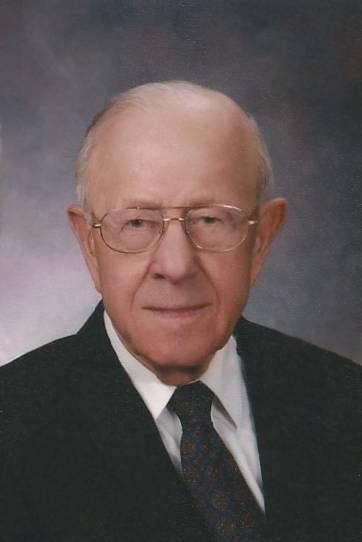 Mass of Christian Burial for Ralph C. Lauer, age 98 of Albany will be 11:00 AM on Monday, June 25, 2018 at Seven Dolors Catholic Church in Albany. Visitation will be from 4:00 PM to 8:00 PM on Sunday, June 24 at the Church. Visitation will continue from 10:00 AM until the time of service at the Church on Monday. Parish Prayers will be at 4:00 PM on Sunday. Arrangements are with Miller Carlin Funeral Homes.

Ralph Christian Lauer was born October 3, 1919 to Christian and Barbara (Wilms) Lauer in Farming, MN. Ralph attended school in Farming. He also attended Agricultural College at the University of Minnesota for two years. He served in the US Army during WWII from September 1942 to September 1945. Ralph served with the 109th Infantry Regiment, 28th Division and was decorated with a Bronze Star Medal, and a Purple Heart. Ralph was united in marriage to Marie Thome on June 28, 1947 in Avon. The couple made their home in Farming where they farmed until they sold the farm to their son in 1988 and retired to Albany. Ralph enjoyed singing with the church choir, gardening, hunting, fishing, socializing and playing cards. He also enjoyed traveling, especially an Alaskan cruise. Ralph was a member of Albany American Legion and Seven Dolors Catholic Church.

Ralph is survived by his children, Linda (Allen) Reitmeier of Duncanville, TX, Jane (Mark) Jepperson of Fargo, ND, and James (Rose Ann) Lauer of Farming, MN, 14 grandchildren, and 11 great grandchildren. He is also survived by brothers, Victor of Albany, and Florian of St. Paul, sister, Rosie of Minneapolis, and sister in law, Mary Ann of St. Martin.

He is preceded in death by his wife, Marie (2010), parents, infant daughter, Janice, and brothers, Clarence, Arthur, Walter, Romuald, and Alois.