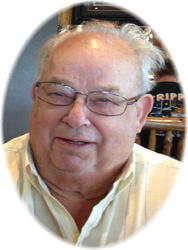 Services celebrating the life of Ralph R. Braegelmann, 79, of Albany, will be at 4:00 PM on Friday, March 25, 2016 at the Miller-Carlin Funeral Home in St. Cloud.  Chaplain James Neppl will officiate and private family burial will take place at a later date.  Ralph passed away Tuesday, March 22 with family at his side at the Benedictine Living Community in St. Peter, MN.  There will be a visitation from 2:00-4:00 PM Friday afternoon at the funeral home.  Arrangements are being made with Miller-Carlin Funeral Home, St. Cloud.

Ralph was born on January 30, 1937 to John and Eleanor (Ludwig) Braegelmann in Richmond, MN.  He was raised with 15 siblings and attended the local school.  At age 18, Ralph joined the United States Navy and proudly served his country for four years.  On June 4, 1958, he married Renee Dingmann in St. Francis and their union welcomed six children.  Ralph was a machinist with ABM Equipment in Hopkins and retired at age 65.  He was a funny man with a quick wit who loved nothing more than to make people smile.  Ralph liked to light-heartedly tease friends and family, rough house with the kids and dogs, play cards, and was an epic storyteller.  He was an avid outdoorsman and liked to fish and hunt.  A machinist to the core, he enjoyed tinkering with everything.  Ralph would always lend a helping hand to anyone in need.  He was a terrific man, loved by many, and will be greatly missed.

Ralph is welcomed in Heaven by his parents John and Eleanor, his granddaughter Amy Braegelmann, his siblings Edwald, Bernadine, Ione, Cecillia, and infant John Jr.; and five stepbrothers and sisters.

There will be a visitation from 2:00-4:00 PM Friday afternoon at the funeral home.

Memorials are preferred to the Benedictine Living Community in St. Peter, MN.

Uncle Ralph was a man with such a positive attitude and always had a smile to share with everyone. He will be greatly missed.