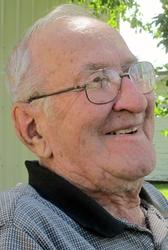 Ralph was born on April 6, 1930 to Anton and Agnes (Knapp) Hondl in Albany. He was raised alongside eleven siblings on the family farm. Ralph entered the US Army in 1955 and proudly served his country in Europe. Upon returning in 1957, he resumed working with his family on the farm. Ralph and Tony handled the dairy cows and George handled the pigs. Family was very important to him and he enjoyed having his nieces and nephews visit. Ralph loved to go fishing and playing cards. He lived on the farm until his death. Ralph was a member of the Seven Dolors Church.

He is preceded in death by his parents Anton and Agnes, his brothers George, Anthony, John, Anselm, Mathias, and Mathew, his sisters Ann Maslow, Mary Hondl, and Agnes Dattilo, his sisters-in-law Lorraine Hondl and Lucille Hondl.

Mass of Christian Burial celebrating the life of Raphael Aloysius Hondl age 87, of Albany will be at 11:00 AM on Friday, November 17, 2017 at Seven Dolors Catholic Church in Albany. Father Julius Beckermann OSB will officiate, and entombment will take place in the parish cemetery.