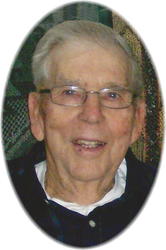 Mass of Christian Burial celebrating the life of Reinhard R. Breth, 87, of Upsala, will be at 11:00 AM on Thursday, October 30, 2014 at St. Mary’s Catholic Church in Upsala.  Reinhard passed away in his home Sunday evening.  Father John Odero will officiate and burial will take place in the parish cemetery with military honors.  There will be visitations at the church from 4:00-9:00 PM Wednesday, October 29 and again after 10:00 AM Thursday.  Parish prayers will be at 5:30 PM and the Knights of Columbus will pray the rosary at 7:30 PM Wednesday evening.  Arrangement are being made with Miller-Carlin Funeral Home, Upsala.

Reinhard was born on May 16, 1927 to Stephen and Catherine (Gerads) Breth Sr. in St. Anthony, MN.  He grew up in central Minnesota alongside six siblings.  After school, Reinhard started crop farming in Bisbee, ND before being drafted into the U.S. Army.  He served his country from 1951-1953 and served during the Korean Conflict.  Reinhard married Ione Mary Braegelmann on May 31, 1955 in Richmond, MN and together they raised ten children on farms in St. Anthony and near St. Francis.  Farming was his passion, but he also enjoyed gardening with his wife and one of his greatest hobbies was cutting wood.  Reinhard liked to play cards, especially 500 and Cribbage.  He enjoyed taking long drives on back roads to look at the countryside and helping Ione make handmade rugs.  Reinhard volunteered for Meals on Wheels, was a member of the Upsala American Legion, the Holdingford VFW, and Knights of Columbus.  He was an active member of St. Mary’s Church in Upsala.

He is preceded in death by his wife of 58 years Ione; his parents Stephen and Catherine; his siblings Werner Breth, Dorain Layton, Herbert “Herb” Breth, and Martin Breth.

There will be visitations at the church from 4:00-9:00 PM Wednesday, October 29 and again after 10:00 AM Thursday. Parish prayers will be at 5:30 PM and the Knights of Columbus will pray the rosary at 7:30 PM Wednesday evening.