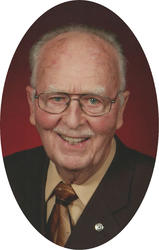 Services celebrating the life of Rev. Glenn L. Midthun, age 95 of St. Cloud, will be 11:00 AM, Monday, October 17 at Bethlehem Lutheran Church in St. Cloud.  Burial will be in the Lyster Lutheran Cemetery in Nelson, WI.  There will be a visitation from 2:00 to 6:00 PM, Sunday and again after 10:00 AM, Monday at the Church in St. Cloud.  Arrangements are being made by the Miller-Carlin Funeral Homes.

Glenn L. Midthun was born on a farm near Nelson, WI on May 31, 1921.  The second of six children of Norwegian parents, Erik and Laura Midthun, Glenn’s early education was spent at a country school reached by walking through the woods and over the hill.  His social and spiritual life revolved around the congregation of the rural Lyster Lutheran Church.

After completing elementary school in 1934, he remained at home and worked on the farm with his father for ten years.  Beginning in 1939, he spent two winters taking a Farm Short Course at the Agriculture School at the University of Wisconsin in Madison.  During this time he attended Luther Student Association meetings and met students who knew the “love and grace of God”.  Following this experience he was gradually drawn to the conviction that he should train for the ministry.  From 1941-5 he continued at the University majoring in speech and literature.  He did his school work on the side completing it before his Junior year.

In 1945 he entered Luther Theological Seminary, St. Paul, MN and was ordained in 1948 following an internship at Trinity Lutheran Church in Moorhead, MN.  His first parish was Mount Carmel Lutheran Church, Milwaukee, WI.  There he met his wife, Sylvia Evenson, a school teacher from Milwaukee. On August 20, 1950 he and Sylvia were the first couple married in the recently built church. After seven years in Milwaukee, he organized a home mission congregation in San Luis Obispo, CA in 1955.  He was called to Canton Lutheran Church, Canton, SD in 1958, where he served as senior pastor until 1965.  The next ten years were spent as senior pastor at Bethlehem Lutheran Church, Aberdeen, SD, where three of his four children graduated from high school.  From 1975 to his retirement in 1987, he served as senior pastor of Bethlehem Lutheran Church, St. Cloud, MN. After retirement, he provided services as a temporary pastor to churches in the St. Cloud area.

Glenn was active in local and regional Lutheran church activities and served in leadership positions on numerous committees.  He was proud of his commitment to help minorities through ministerial outreach efforts both locally and globally.  He enjoyed all phases of the ministry with special affinity to helping the troubled and bereaved and found personal fulfillment in his faith and work.

A life-long learner, Glenn loved investigating new topics and reading all types of books including poetry.  For many years, his greatest hobby was building an A-frame cabin near Bemidji, MN, along with the furniture, a canoe and a small speedboat during his summer vacations from Canton.  His enjoyment of woodworking lasted throughout his life and he created furniture, storage chests and napkin holders that were shared with others.  Glenn was seldom without his camera, capturing photos of friends and family, vacation moments, and the gardens alongside his house.  He and Sylvia enjoyed travel to numerous foreign countries.  He relished a good joke and often shared “Ole and Lena” humor.  A capable cook, Glenn delighted in inviting friends to dinner, never sitting long enough to chat, but hovering over guests offering more to eat.  An early “HiFi” enthusiast, Glenn was never without his complicated stereo equipment and an abundance of cords and cables.  He loved playing dominoes with visitors.

Glenn was a passionate Rotarian and made many friendships through his 54-year membership.  He was proud of his perfect attendance awards and was a Paul Harris Fellow in recognition of his contributions to the Rotary Foundation.  He was awarded the Lifetime Achievement Award in 2008 for his outstanding dedication and commitment to the community and the club.

The family extends their heartfelt appreciation to the many people who have been friends over his long life and who have provided assistance and companionship in myriad ways.  We are especially grateful to the care team at St. Benedict’s Care Center, who kindly watched over him for the past three years.

Donations can be directed to Bethlehem Lutheran Church and the St. Cloud Rotary Foundation.

My prayers are with your whole family during this time. I remember Pastor Midthun as senior pastor at Bethlehem in Aberdeen. He is one of the influences on how I do ministry to this day. May God grant you comfort and hope.

I have fond memories of the gentle guidance of Pastor Midthun when he was Senior Pastor at Aberdeen’s Bethlehem Lutheran.  His smile was always warm and kind and that was so welcoming to see every Sunday.  Prayers for him and his family!  He was a blessing to so many.

We served with Glenn in Aberdeen from 1971-1976 in an Associate position.   Glenn was an excellent model of a Senior Pastor and influenced the rest of our ministry in a most positive way.   May God comfort and bless each of you in his family and may God bless his memory !   LeRoy and Val Flagstad.

I remember a significant visit with Pr Midthun in his office in Aberdeen.  From then, I hoped to begin a full-time career as a pastor.  35 years + now.