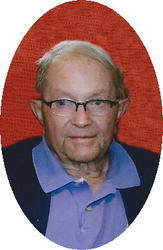 Mass of Christian Burial celebrating the life of Richard “Bottle” Schiffler, age 79, of Albany, will be at 11:00 AM on Tuesday, March 31, 2015 at Seven Dolors Catholic Church in Albany with burial taking place in the parish cemetery.  Father Robert Rolfes will officiate.  Father Cletus Connors and Father Brad Jenniges will be concelebrants. Bottle passed away at Mother of Mercy Nursing Home on Thursday afternoon.  There will be a visitation from 4:00-8:00 PM on Monday, March 30, 2015 and again after 10:00 AM Tuesday morning all at the church.  Parish prayers will be at 4:00 PM Monday evening at the church.  Arrangements are being made with Miller-Carlin Funeral Home, Albany.

Bottle was born in St. Anthony on November 7, 1935 to Wilfred “Wiff” and Anna (Silbernick) Schiffler.  He grew up alongside 11 siblings and graduated from Albany High School.  Bottle attended a year of college at St. John’s University and spent another serving his country in the United States Army.  On October 15, 1960 he married his high school sweetheart, Janet Marie Silbernick, at Seven Dolors Catholic Church in Albany and they raised two children together.  He owned Jack & Jill Grocery, All Area Sports, and spent 20 years working with the Albany Fire Department.  Bottle was an all-around good guy who loved Albany athletics and was a strong supporter of the Huskies.  He was a dog lover and they loved him right back, especially shih tzus Maizy and Nina, and the golden retriever Emma.  Bottle liked fishing, was an avid golfer, and was one of the kindest men you would ever meet.  He was a man of deep faith who attended mass daily and could be found in his “special spot.”  Bottle often enjoyed going for a drive with Jan to spend time alone together.  He was a true family man and he adored his grandchildren.  He relished the time he spent with them, teaching basketball and golf, and was an amazing Grandpa.  The nursing staff at Mother of Mercy adored him and he touched so many lives though only a resident there a short time.  Bottle was an active member of Seven Dolors Catholic Church and the Knights of Columbus (CHECK).

I am very sorrow to hear of the loss of Bottle.  I hadn’t seen him since 1985 for I moved to Arizona. I remember he and Jan being great parents to you.  I know Bottle was a huge asset to the community, always doing what was right. He will be dearly missed by all who knew him! May he be golfing up in  heaven above and reunited with loved ones. God Bless you all at this time of sorrow. You are in my thoughts and prayers. Amy Netter Warner