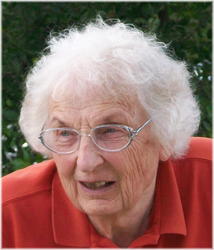 Mass of Christian burial celebrating the life of Rita Bernadine Dwyer, age eighty-seven, of St. Cloud will be 10:30 am Saturday, October 1, 2011, at the Christ Church Newman Center, St. Cloud.  Father Tony Oelrich will officiate and burial will take place at Calvary Cemetery following the service.  Rita died suddenly in Duluth Tuesday evening.  There will be a visitation from 4:30-8:00 pm Friday, September 30, 2011, at the Newman Center and from 9:30 am until the time of the service on Saturday at the Newman Center.  Parish prayers will be at 4:30 pm.   Arrangements are being made with the Miller-Carlin Funeral Home in St. CloudRita was born February 17, 1924, to Anton and Sophia (Beste) Schulte in Freeport.  She grew up on the family farm in Freeport.  She married John Dwyer in 1947.  The couple settled in St. Cloud where she lived the rest of her life.  Rita was a publisher and owner of North Star Press with her husband for thirty-two years before retiring in 2001.  She was a devoted member of the Newman Center Church, TOPS, and Great River Interfaith Partnership.Rita is survived by her children Paul (Lou LeGarde) Dwyer, Barnum; Peter (Rosemary) Dwyer, Avon; James (Jennifer) Dwyer, Cold Spring; Thomas (Deborah) Dwyer, Lutsen; Patrick (Jeanne Cofell) Dwyer, Cold Spring; Mary (Jonathan Fribley) Dwyer, St. Cloud; daughter-in-law Corinne Dwyer, Clearwater; her siblings Laurianna Sjogren, St. Cloud; Robert (Brigitta) Schulte, Marietta, GA; her grandchildren Seal, Miranda, Elizabeth, Brian, Molly, Patrick, Emeric, Erin, Lauren, John Samuel, Mackenzie, Nolan, Logan, Kieran, Emerson, Liam, Benjamin, Gabriel, Noah, and her great-grandchildren Sean, Hunter, and Elliott.She is preceded in death by her parents Sophia and Anton Schulte, her husband, John Dwyer who passed away December 21, 1986, her son John F. Dwyer, and her siblings: Rosemary Raeker, Edmund Schulte, and Joseph Schulte.In lieu of flowers memorials are preferred to be sent to Anna Marie’s Alliance, Catholic Charities Emergency Food Shelf or the Wil Illies lecture series at Christ Church Newman Center.

In lieu of flowers memorials are preferred to be sent to Anna Maries Alliance, Catholic Charities Emergency Food Shelf or the Wil Illies lecture series at Christ Church Newman Center.

I have known Rita since 1967 and first met her in Tops. She was such a supportive and friendly lady. She was loved and admired by many. You her family are in my prayers and have my deepest sympathy. May she rest in peace. Sue Meers

I was shocked to learn of Rita’s sudden passing. She was a fine woman and I enjoyed my contacs with her in Minnesota’s independent press world. I have long admired her for continuing the life of North Star of St. Cloud Press which she and her husband founded and which has continued on with daughter-in-law Corinnne and later with granddaughter Seal. I relished the fact that it was a thriving press with an all-woman management team.

She will assuredly be missed. My heartfelt condolences to her family and deepest sympathy on their loss.
RIP, Rita. You’ve earned it.

Peter and Family,
We got the email of your mother’s passing and we were just leaving for a vacation or we would have come to the funeral. We will keep you in our prayers! Was great to see you at the last reunion!
Terry and Pam