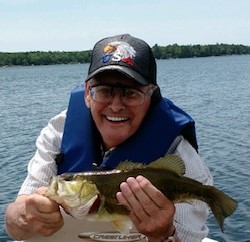 The service for Robert will begin at 11:00 AM on Saturday, November 19th with visitation preceding it from 10:30-11 at Chippewa Lutheran Church in Brandon, MN.  Lunch at the church will follow the service at the cemetery. Cremation arrangements are being made with Miller-Carlin Funeral Homes.

Robert David Smith (Bob), 75 years young, passed away on November 1, 2022, at the St. Cloud hospital, surrounded by his loving family.

Bob was born on January 3rd, 1947 to parents Robert Clarence Smith and Marie Hilda (Kalande) Smith.  Bob was an only child, born in Minneapolis, and later moved to the Soderville area.  Bob enlisted in the US Navy and served on board the aircraft carrier called the USS Bon Homme Richard off the coast of Vietnam.

When Bob returned from active duty, he met the love of his life, Diane Bartnick.  They soon married and made their home in Wyoming, MN.  They had two children, Dave and Sheila.  They later moved to Brandon and finally to their current home in Albany.  Bob was an avid fisherman, loved old cars, and was called “Bondo Bobbie” because of his auto body skills.  He was a very hard worker and was always willing to lend a helping hand whenever possible.  In his retirement years, he and Diane enjoyed several winters in Florida where he had many great friends.  He also enjoyed going to car shows to show his restored 1959 Ford F100 pickup.  He always picked up others with his smile and his jokes and witty personality, even joking with the staff at the hospital in his last days.

Bob is survived by his wife, Diane, of 54 years, his son Dave (Dawn), daughter Sheila; grandchildren Ryan (Maria), Chase (Kylie), and Cameron; great-grandchildren Rowan, Ethan, Abby, Tim, and many other family and friends.  He was preceded in death by his parents, his aunt, and uncles, and his granddaughter, Alanah.

The service for Robert will begin at 11:00 AM on Saturday, November 19th with visitation preceding it from 10:30-11 at Chippewa Lutheran Church in Brandon, MN.  Lunch at the church will follow the service at the cemetery.

He was the best of the best. Great babysitter for all of us kids. Will miss him dearly. Love you Bobby!

So sorry to hear of Bob’s passing. We hit it off right away when we met as we both love old cars. Always smiling always happy. My fondest memory of is when him and Diane came to visit and he wanted to look at my cars, i asked if he’d like to take a ride in my 55 Mercury Hardtop. He said he’d love to. So down the road we went nice and easy , he said this is great ! We turned around and I floored the old Mercury and ran it through the gears up to about a 100 mph. He had a grin ear to ear , he couldn’t believe how fast the car was ! Bob is now cruising in his 64 R Code Ford Galaxy in heaven . Prayers go out to all his family members

Sound like Bob enjoyed life… Did many things he enjoyed and maybe not enjoy… ( ha ha ) and had a wonderful family.. R.I.P ……Bob. Sending hugs to Diana and the family…Love you Cousin ( Diana ) .. The Lord will watch over you and the family…and Bob will looking down on you all…Hugs and kisses for you ALL !! LOVE YOU
COUSIN… Joyce Simonds & ( husband Brad Simonds )

Bobby was about 7 yrs old when he and our girls built a big snowman in our front yard,then we had a huge ice storm. A couple days later Bobby came walking up,took a look at the snowman,doubled up his fist and took a big pot shot at the snowman.Then in amazement ,he stood back and said ,that,s there to stay. Oh for memories Sorry to hear of Bob passing. Blessings and best wishesto the family.