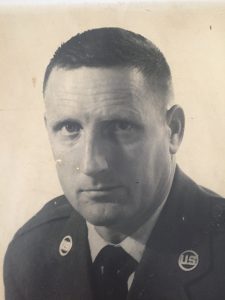 The Funeral Service for Robert Cecil Maine, age 90, will be held at 11:00 AM on Tuesday, December 1st at the Church of St. Benedict in Avon.  There will be a visitation held one hour prior to the service at the church from 10:00-11:00 AM.  Robert passed away on Saturday, November 21st at the Melrose Hospital.   Arrangements have been entrusted to the Miller-Carlin Funeral Homes.

Robert was born on August 5, 1930 in Atkinson County, GA, the son of Robert and Lillie Belle (Dukes) Maine.  He joined the Air Force in August of 1949, starting out at Sheppard Air Force Base in Texas.  Early in his 23-year career, he met his bride, Alice Ebnet, in Minneapolis, MN; they married October 13, 1951 at Mitchel Air Force Base on Long Island, NY and were stationed throughout the United States until he retired and took her back home to Holdingford, MN in 1972.

After retiring from the Air Force, Robert began working for the United States Postal Service, first as a pedestrian mail carrier in St. Cloud, and then as a rural mail carrier out of Avon, MN.  He delivered mail for almost 20 years, and once commented on how lucky he was to be able to do the two things he had always wanted to do in his life, “Fly airplanes, and be a mailman.”

Robert was active within his community as the public announcer at his sons’ high school football and basketball games for many years.  Robert was an active member of the Holdingford Legion Club, Holdingford Veterans of Foreign Wars, and the Forty & Eight in St. Cloud, MN.  He also belonged to the Rural Letter Carriers Association.

He was preceded in death by his parents, Robert and Lillie Belle; brothers, James and Herman Maine; half-siblings, Emmett and William Maine, Jessie Mae Browning, and Lessie Jordan; and daughter-in-law, Audrey Maine.

Sometimes you were tough, and thinking back on all the crap we pulled I’m sure I earned my share. You taught us to hunt and fish and let us run around in the woods and grow up all over this country. I often think about my first little league game when you showed up with brand gloves for me and Gerry so we could retire the sad pieces of leather that we called baseball gloves. It’s been a hell of a ride and you will be dearly missed by all. I love you…..wish I had told you more often……

Many thanks for making the live feed of the funeral available for those who could not be there. Living a thousand miles away, I did not get to see my grandfather as much as I would have liked. The remote feed at least allowed me to take part in some small way and see my grandfather one last time..