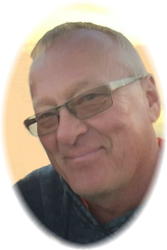 The Mass of Christian burial celebrating the life of Robert “Bob” Ehrlichmann, Jr. age 62 of Holdingford, will be 11:00 AM, Monday, August 22 at the Church Of All Saints, St. Mary in Holdingford.  Burial will be in the parish cemetery.  Bob tragically lost his life on July 31 as a result of an accident while riding his motorcycle.  There will be a visitation from 4-8:00 PM on Sunday, August 21 and again after 10:00 AM, Monday at the church in Holdingford.  Arrangements are being made by the Miller-Carlin Funeral homes.

Bob was born November 26, 1953 to Robert and Dorothy (Feld) Ehrlichmann.  He graduated from Holdingford High School in 1971.  Bob started working at Polar Tank Trailer on October 6, 1972 as a shop worker.  In 1984, He joined the Quality Control Team and eventually became the Head Quality Control Inspector.  Bob was employed at Polar Tank Trailer for over 44 years.   Bob was united in marriage to Brenda Langner on August 1, 1998.  Bob enjoyed hunting and fishing along with his wife Brenda.  They had also become avid gardeners.  Bob, being the constant joker, started a vegetable growing contest with his mother-in-law.  His kids recently had to decide upon the largest onion winner.  This year’s title went to Diane.   Bob was a generous soul who enjoyed giving.  Many who knew him knew about his fondness of picking potatoes and giving them away to others.   Bob was known to always have a project going and was always willing to lend a hand to family and friends.  Bob and Brenda enjoyed riding their motorcycles and traveling many miles together.  They were looking forward to traveling the country together.

He is preceded in death by his parents.

There will be a visitation from 4-8:00 PM on Sunday, August 21 and again after 10:00 AM, Monday at the Church of All Saints St. Mary in Holdingford.

In lieu of flowers, memorials are preferred to the family to help with mounting medical bills. Please visit the Caring Bridge website and theGo-Fund-Me page for Brenda Ehrlichmann.

So very sorry for the loss of your Father.  Thoughts and prayers go out to you.
Savor the memories.  May you find strength and love in the days ahead. Let me
what I can do to help in any way.

Bob was my Godfather.  I will always remember the fun times we had when he would come with us to Lake Shamineau on opener.  Bungee cording the camper doors shut so he could be first to the lake or burying the anchor so we would have to shovel it out before we could take off.  He was a practical joker with a big heart.   I am proud to be his Godson.  I will miss his infectious laugh and hearty handshake. He will be dearly missed but never forgotten.