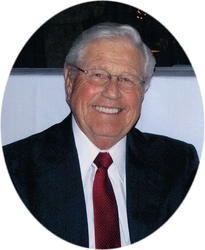 Funeral services celebrating the life of Roger John Barthelemy, age 86 of St. Cloud will be 11 AM Saturday, March 12, 2011 at the Life Assembly of God Church in St. Cloud.  Pastor Craig Moore will officiate, and burial will take place at the Minnesota State Veterans Cemetery at a later date.  Roger died peacefully at his home surrounded by his family Monday evening.  Friends may call from 4-8 PM Friday, March 11, 2011, with a prayer service starting at 6 PM at the Miller-Carlin Funeral Home, and again from 10 until the time of the service at Life Assembly of God Church on Saturday.  Arrangements are being made with the Miller-Carlin Funeral Home of St. Cloud.Roger was born November 19, 1924 to George and Mary (Luckemeyer) Barthelemy in St. Cloud.  After graduating from St Cloud Technical High School, Roger enlisted in the Army where he served from 1943-1946.  Roger was stationed in New Guinea during WWII where he fought as a rifleman.  After his time in the service he married Eileen H. Kirmeier on July 26, 1952 at St. Mary’s Cathedral Catholic Church in St. Cloud.  He lived nearly his entire life in St. Cloud.  Roger was a Commercial Gas Manager for N.S.P for 33 years before retiring in 1987.  He was a member of the St. Cloud Legion, VFW, Eagles, and Jaycee’s.  He was also part of the Life Assembly of God congregation.Roger is survived by his wife Eileen Barthelemy, St. Cloud; his children Linda (Ken) Thielen, St. Cloud; Steven (Jacki) Barthelemy, Royalton; Timothy (Debi) Barthelemy, Otsego; Joel (Shannon) Barthelemy, Scottsdale, AZ; Jenny (Marc) Grove, Hassan; his siblings Gerald (Shirley) Barthelemy, St. Cloud; Rolland (Paula) Barthelemy, Cold Spring; Mary Jane (Dave) Morgan, Omaha, NE; 14 grandchildren, and 4 great-grandchildren.He is preceded in death by his parents Mary and George Barthelemy, and his brother Thomas Barthelemy.Our heartfelt gratitude to the staff at CHF, Pacemaker, and Heart Clinic, and HHC, especially Barb Bollinger,Jenny Baurely, and Keith Lurie, Amy and Deana for the wonderful care of our husband and dad.

Friends may call from 4-8 PM Friday, March 11, 2011, with a prayer service starting at 6 PM at the Miller-Carlin Funeral Home, and again from 10 until the time of the service at Life Assembly of God Church on Saturday.

Uncle Roger will be remembered by all of us for the wonderful man he was. Our heart goes out to Aunt Eileen, and all of Roger’s children and grand Children. He will be missed!!