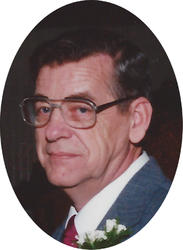 The Mass of Christian Burial, celebrating the life of Roger Mettenburg, age 87 of St. Cloud will be 11:00 AM, Thursday, September 7, at the Church of St. Anthony in St. Cloud,  burial will be in Assumption Cemetery.  Roger died Saturday at the St. Cloud Veterans Affairs Medical Center.  There will be a visitation from 4-8:00 PM, Wednesday at the Miller-Carlin Funeral Home in St. Cloud and again after 10:00 AM Thursday at the church.  St. Anthony parish prayers will be at 5:00 PM Wednesday at the funeral home.

Roger was born October 6, 1929 in St. Cloud to Henry and Susan (Lauer) Mettenburg.   He has lived all of his life in St. Cloud with the exception of the years he served in the U.S. Navy.  He married Dolores Inderieden on January 19, 1952 in St. John’s Cantius Catholic Church in St. Cloud.  Roger worked as a metal finisher at Franklin Manufacturing his entire working life, retiring in 1993.  He was a member of St. Anthony’s Catholic Church and VFW post 4847.

A special thank you to the staff of the V.A. Medical Center, building 49, floor 1.

The Mass of Christian Burial will be 11:00 AM, Thursday, September 7, at the Church of St. Anthony in St. Cloud,

We visited Uncle Roger often. We had stimulating conversations. He was always upbeat and positive. We will miss him.