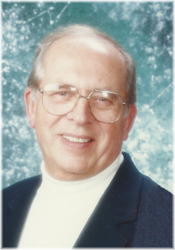 Services celebrating the life of Ronald D. Boos, 84, Burtrum, will be at 11:00 AM on Monday, March 20, 2017, at Gethsemane Lutheran Church, Upsala.  There will be a visitation one hour prior to services.  Pastor CJ Boettcher will officiate the service.  A private burial will be held at a later date at the Minnesota State Veterans Cemetery, Little Falls.  Ron passed away after several months at the Good Shepherd Nursing Home, Sauk Rapids, which provided excellent care. Arrangements are being made with Miller-Carlin Funeral Home, Upsala.

Ron was born on July 21, 1932, to Charles and Leona (Emon) Boos in Minneapolis and he grew up with one brother.  He joined the United States Army and proudly served his country during the Korean Conflict.  On June 19, 1954, Ron married Janet Faye Watson in Minneapolis and together raised three children.  He was employed at Wonder Bread before working as a Janitorial Engineer/HVAC.  Ron retired at age 60 after 30 years with the Minneapolis Public Schools.  He and Janet then moved to their lake home where he was a member of the Mound Lake Association.  Ron loved to be outside hunting and fishingwith his boys. He and Janet enjoyed spending winters in Lake Havasu, AZ with many others from Mound Lake.

He is preceded in death by his wife Janet in January 2016, and his parents Charles and Leona Boos.