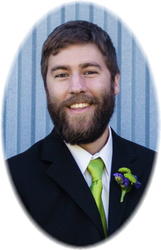 Services celebrating the life of Ryan L. Schmit, age 25, of Holdingford, will be at 11:00 AM on Thursday, February 26, 2015 at Our Savior’s Lutheran Church in Albany.  Pastor Stephen Cook will officiate and burial will take place in Arban Cemetery after a luncheon.  There will be a visitation from 4:00-8:00 PM on Wednesday, February 25, 2015 at the Miller-Carlin Funeral Home – Holdingford and again after 10:00 AM until the time of the service Thursday at the church in Albany.  Arrangements are being made with the Miller-Carlin Funeral Home, Holdingford.

Ryan was born on July 8, 1989 to Lawrence and Lenore (Guse) Schmit at the St. Cloud Hospital.  He grew up with two sisters and graduated from Holdingford High School.  Ryan loved music, played the guitar, piano, and drums.  While in high school, he and his friend Danny were in a band together.  Ryan enjoyed writing and playing his own original music.  He also crafted guitars and was a gifted artist.  Ryan participated in theater, both in high school and later in college.  He was a sensitive young man who liked to wax philosophical.  Ryan liked to joke, to be absurd, and to make others laugh.  His love for animals was evident when, as a young child, he’d find animals to rescue, take care of, and keep at home.  Ole, his dog, was a beloved companion.  Ryan enjoyed being outdoors, lying in the grass, and soaking up the sun.  His sisters fondly recall the many bike rides on the Wobegon Trail to Albany.

He is preceded by his grandparents Alfred and Marie Schmit, Doris and Herman Guse, uncles Ronald Schmit and Glen Guse, aunt Jill Berry, and his constant companion Ole.

I am so sorry to hear of your loss.   Prayers for you all during this difficult time.

We will send a ray of sunsine your way to help warm your path and comfort you during this difficult time.  We are sorry we will not be able to attend the funeral but our hearts will be with you all.  Ryan was a special young man and will be missed.

I am very sorry for your loss, and my prayers are with you.  I hope you are finding comfort in shared memories and that you feel the love of family and friends.