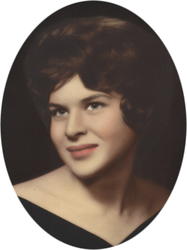 A Mass of Christian Burial celebrating the life of Sharon L. Honer, age 70, of St. Cloud, will be at 10:30 AM on Friday, August 21, 2015 at St. Mary’s Cathedral – Lower Chapel in St. Cloud.  Father Bob Rolfes will officiate and burial will take place in Assumption Cemetery.  There will be a visitation from 4:00-8:00 PM on Thursday, August 20, 2015 at the Miller-Carlin Funeral Home in St. Cloud and again after 9:30 AM Friday at the church.  Parish prayers will be on Thursday at the funeral home; time to be announced later.  Arrangements are being made with Miller-Carlin Funeral Home, St. Cloud.

Sharon was born on September 10, 1944 to Raymond and Ethelreda (Hawla) Brown in St. Cloud.  She grew up with ten siblings, graduated high school, and earned her Bachelor’s degree at St. Cloud State University.  On August 21, 1963, she married Patrick F. Honer at St. Mary’s Cathedral and they had one child together.  Sharon was a hard worker but still found time to enjoy the company of her friends and family.  She worked with ceramics and liked to crochet in plastic canvasses.  Sharon loved music and had a wide range – from Waylon Jennings to Metallica.  A unique lady, she was a lot of fun and a damn good cribbage player.  Her beloved dogs, Scout and Athena were a big part of her life.  Sharon was always a leader, supportive of other people, and was a second mother to many.  Over the years, her nickname of “Ma Honer” become “Momma Wolf,” and she is described as being a strong and independent woman.  Sharon worked as an Employment Interviewer and Counselor with Fingerhut and was one of the first female executives in MN.  She also worked as a Property Manager for 25 years before her retirement.  She was a member of St. Mary’s Catholic Church in St. Cloud.  Her family has seen more than its share of illness and death and over the years she has lost many siblings to Lou Gehrig’s Disease (ALS) and cancer.  Sharon had survived a brain aneurysm and two strokes before learning she has lung cancer.  She enters Heaven, whole and healthy and finally at peace.

Sharon is survived by her son Patrick Honer, St. Cloud; her sisters, Naomi (Michael) Ragatz, St. Cloud; Anita Hinkemeyer, Kimball; her neices and nephews; as well as many family and friends.

She is reunited with her family in Heaven: her parents Raymond and Ethelreda Brown, her brothers William, Raymond Jr., Gary, James, and John, and her sisters Shirley Stadther, Mary Justin, and Carol Stadther.

A Mass of Christian Burial celebrating the life of Sharon L. Honer, age 70, of St. Cloud, will be at 10:30 AM on Friday, August 21, 2015. Father Bob Rolfes will officiate and burial will take place in Assumption Cemetery.

Pat, I am so very sorry for your loss.  Memories will get you through this tough time, soon you will find yourself smiling at the memories of her and all the good times.