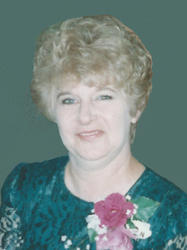 Sharon was born September 19, 1947 in Holdingford to Alfred and Alvina (Rakotz) Dobis.  She graduated from Holdingford High School and then married Bob Nathe on August 12, 1967.  The couple recently celebrated their 50th wedding anniversary.  Sharon worked on the production line at Gold-N-Plump for over 24 years, retiring in 2007.  She was a member of the St. Benedict’s Catholic Church in Avon.

She is preceded in death by her parents, and her brothers and sister, Allen Harlander, Alfred Dobis, Jr., Ronald Dobis, Robert Dobis and Joan Hughes.

Friends and family may gather in the St. Benedict’s gathering space after 10:00 AM, Friday.

The Mass of Christian Burial, celebrating the life of Sharon M. Nathe, age 70 of Avon, will be 11:00 AM, Friday, November 17 at the St. Benedicts Catholic Church in Avon. Fr. Greg Miller, OSB will officiate, burial will be private.

My deepest sympathy to you and your family.  I’ll be thinking of you in the days ahead.