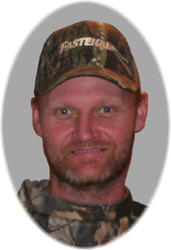 Mass of Christian burial celebrating the life of Steven Donald Schaefer, age 44 of Albany will take place at 11AM, Monday, July 28th 2014 at Seven Dolors Catholic Church in Albany.  Father Cletus Connors OSB will officiate, and burial will take place in the parish cemetery following the service.  Steve died peacefully in his home surrounded by his loving family Thursday evening after a long and hard fought battle with cancer.  There will be a visitation for Steve from 3-8PM Sunday, July 27th at Seven Dolors Catholic Church, (Parish Center Gymnasium) and again from 10AM until the time of the service Monday morning at the church.   Arrangements are being made with the Miller-Carlin Funeral Home of Albany.Steve was born December 9th 1969 in Paynesville to Herman and Alice (Hemmesch) Schaefer.  He grew up on his family farm near St. Martin and married Karen Wehseler on May 11th 2002 at Seven Dolors Church in Albany.  After marriage, the couple moved to a home near his family farm outside of St. Martin where together they raised their two boys.  Steve most recently worked for Rotochopper in St. Martin as an Electrical Technician.  Throughout his entire life, Steve has had a true love of the outdoors which he showed through his passion for hunting; a tradition he passed on to his sons.  Steve put his family above all else.  Being a dedicated and loving father and a husband meant everything to him.  He was a member of Seven Dolors Catholic Church, and a retired member of the St. Martin Fire and Rescue Department.He is survived by his loving wife and sons Karen Schaefer, Jaydon (9), and Devon (8), of St. Martin; his mother Alice Schaefer, St. Martin; and his siblings, Jerry (Deb) Schaefer, St. Martin; Allen (Patty Meyer) Schaefer, St. Martin; Barb (Kerry) Mergen, Farming; Joan (Duane) Schmitt, St. Martin; Donna (John) Hoeper, Alexandria; Dean (Bonnie Holthaus) Schaefer, St. Martin; and many nieces and nephews.He is preceded in death by his father Herman Schaefer and his mother-in-law Agnes Wehseler.In lieu of flowers, memorials are preferred.

There will be a visitation for Steve from 3-8PM Sunday, July 27th at Seven Dolors Catholic Church, (Parish Center Gymnasium) and again from 10AM until the time of the service Monday morning at the church.

My sympathy, prayers sent! Steve is a good person, and will be missed.