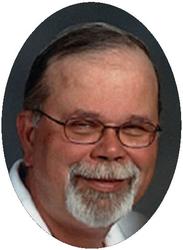 Services celebrating the life of Steven D. Bradshaw, age 63, of Albany will be at 11:00 AM on Saturday, January 16, 2016 at Our Savior’s Lutheran Church in Albany.  Pastor Bobbi Bell will officiate and private burial will take place at the Minnesota Veterans Cemetery in Little Falls on Tuesday, January 19, 2016.  Steve passed away in the comfort of his home with his wife and children at his side after a hard-fought battle with pancreatic cancer.  There will be a visitation an hour before the service at the church in Albany.

Steve was born on September 18, 1952 in Watertown, SD to Dale and Donna (Olson) Bradshaw.  He was raised with two siblings and graduated from Watertown Senior High School.  Steve proudly served his country in the United States Air Force from 1973-1978.  He was a man of great integrity, very intelligent, and he loved to “shoot the bull.”  On August 11, 1990, he married Denise Mohr in Watertown, opened his heart to welcome her son Chris, and together they had their daughter Kaitlyn.  When they met, he was a Packer fan, but Denise converted him to be a Vikings fan.  His favorite sport was golf: he loved to play, took part in a Men’s League at the Albany Golf Course, and enjoyed watching it on TV.  Steve and Denise were good for each other: he’d help slow her down, while she’d remind him to “keep it simple stupid.”  He had a wonderful sense of humor, was funny, quite the character, and would improvise stories to keep folks laughing.  He was even willing to look silly, oftentimes donning masks or costumes, or singing songs if that got a laugh.  His daughter lovingly called him a “crusty marshmallow” because of his big heart.  Steve had a big heart and helped people whenever he could.    He also had a soft spot for animals and over the years had dogs, cats, and a bird.  He took great pride in his yard and could be found mowing, weed whacking, and gardening.  Steve celebrated his 23-year sobriety and was a deeply religious man.  He was a good Christian and would witness to anyone who would listen.   Steve was a good dad, a great husband, and will be missed so very much.  He worked as a groundskeeper at the St. Cloud VA Medical Center.  He was a member of DAV and the Albany Golf Course.

He is preceded by his grandparents Boyd & Lillian Bradshaw and R. E. & Nancy Olson.

There will be a visitation after 10:00 AMon Saturday, January 16, 2016 at the Our Savior’s Lutheran Church in Albany.

Funeral Serviceswill be at 11:00 AM on Saturday, January 16, 2016at the Our Savior’s Lutheran Church in Albany. Pastors Steve Olson and Bobbi Bell will officiate and private burial will take place at the Minnesota Veterans Cemetery in Little Falls on Tuesday, January 19, 2016.

There are no words to be spoken or written to help ease the sorrowor or provide you with a sense comfort during this time of immense grief. May the good Lord, His son and the love of your family and friends provide you with peace. With love and the utmost respect for the gentle care and love you all provided to your beloved Steve.

So saddened to learn of Steve’s passing, but know he is just what heaven needed, and he, heaven. Many years ago, in the 70’s, I was lucky enough to work with Steve at Tradehome Shoes in Watertown and enjoyed his company immensely…..he always kept us laughing….he made fun out of the most mundane chores.  Please know you are all in my prayers as you journey through this sorrow.  May you know the love of God himself through your family and friends.

I sought the Lord, and he answerd me, delivered me from all my fears. Look to him and be radiant.

Steve will always be remembered as a man of great integrity, great morals. He will be sadly missed by all of his classmates of Watertown Sr. High.

My prayers go out to his family.