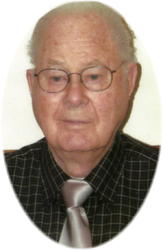 Mass of Christian burial celebrating the life of Truman Byron Anderson, age 90, of St. Cloud, MN will be Saturday, June 23, 2012 at 11:00 AM at St. Anthony’s Church in St. Cloud.  Burial will be private.  There will be a visitation from 9:00 AM until the time of service on Saturday at the church.  Arrangements are being made with Miller-Carlin Funeral Home in St. Cloud.Truman was born on May 10, 1922 in Ronneby, MN to Albert and Adrianna (Allen) Anderson and was the youngest of three children.  After graduating from Becker High School, he served in World War II as a Marine Corps 2nd Lieutenant.  After the war, Truman returned to Minnesota to finish college and graduated with a teaching degree.  In June of 1947, he married Marie Kolbinger and together they raised five daughters during their 36 year marriage.  Truman taught Industrial Arts in Upsala, MN for 6 years.  The Boy Scouts played such an important role in his life, that he moved his family to Brookings, SD to start a new career as a Professional Boy Scout Executive.  During the scouting years, the family lived in Madison, WI and Virginia, MN.  He held many titles through the years, but the time he spent with the scouts was always the most important to him.  Marie passed away on October 2, 1983 in Virginia, MN, after which, Truman retired from scouting and moved to St. Cloud in 1984.  Truman married Bernice (Kuefler) Burgoyne, a long-time St. Cloud resident, in 1986 and they enjoyed 25 years together.  Truman and Bernice spent winters in Texas and enjoyed many visits to the lake cottage during the summers.  Truman was an accomplished woodworker and together they spent many hours piecing and sewing beautiful quilts.  He was a member of the Knights of Columbus and St. Anthony’s Church.Truman is survived by his wife, Bernice, of Waite Park; his children Michael (Colleen) Burgoyne, Sauk Rapids; Carol (William) Whittom, St. Charles, MO; Jean (Steve) Moder, Toledo, OH; Mary (Donald) Schmitt, Rochester Hills, MI; Cathy (Bruce) Goldade, Deforest, WI; Diane (Kevin) Raines, St. Cloud.He is preceded in death by his parents, his first wife, Marie, both sisters, Mildred Kolbinger and Verna Dyson, and their husbands.Memorials are preferred to Heart Association, American Diabetic Association, or Boy Scouts of America in lieu of flowers.

There will be a visitation from 9:00 AM until the time of service on Saturday at the church. Arrangements are being made with Miller-Carlin Funeral Home in St. Cloud.

Truman was an important role model, mentor and adviser when I was a teenage Boy Scout in Madison. He was always humble, trustworthy, loyal, helpful, friendly, and all of the other parts of the Scout law.