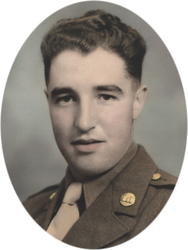 Mass of Christian Burial celebrating the life of Urban J. Hartman, age 89, of Waite Park, will be at 11:00 AM on Thursday, April 16, 2015 at St. Peter’s Catholic Church in St. Cloud.  Father Peter Kirchner will officiate and burial will take place in the St. Peter and Paul Cemetery in Richmond.  Urban passed away on Sunday, April 12, 2015 at the VA Medical Center.  There will be a visitation on Thursday, April 16, 2015 at 10:00 AM until the time of service at the church.  Arrangements are being made with Miller-Carlin Funeral Home, St. Cloud.

Urban was born on May 5, 1925 to George and Mary (Walerius) Hartman in Cold Spring.  He was raised with five siblings and attended the local school.  After he left school, Urban served his country as a member of the U.S. Army during WWII.  He returned to St. Cloud and worked for Wirth Granite Company for 5 years.  Urban married Carol Maleska on October 15, 1949 at St. Peter’s Church in St. Cloud and they lived in Foley.  It took him a few years to convince Carol to farm, but eventually he did.  Urban farmed for 24 years in Foley, then retired to Horseshoe Lake in Richmond for another 24 years.  In 2002, they made their final move to Waite Park.  He was a very private man who liked nothing more than to spend time with his wife, on the farm, with the cows and the crops.  His family fondly remembers time spent fishing, ice fishing, and following the MN Twins baseball team.  Urban was a member of St. Peter’s Catholic Church.

Urban is survived by his wife of 65 years, Carol; his sister Bertilla Lommel, St. Cloud; and other family and friends.

He is preceded by his parents George and Mary, his brothers Florentius and Edmund, and his sisters Clara Hartman and Eleanor Dolphin.