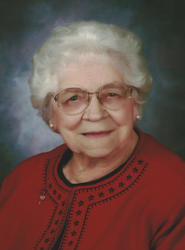 Valeria was born May 14, 1918 in Richmond to William and Anna (Gertken) Schneider.  She married Othmar Braegelmann on October 10, 1944 in Richmond.  The couple farmed together in the Albany area.  She enjoyed quilting, playing cards and baking. She was a member of the Seven Dolors Catholic Church, the Seven Dolors Christian Women, the St. Ann’s Society and the St. Mathilda Mission Group.

She is preceded in death by her parents, her husband Othmar on August 20, 2000, her son, James on August 26, 1948 and her brothers and sisters, Velma Ehresman, Evarista Ruegemer, Mary Ann Schmitt, Florentine Schefers, Raymond Schneider, Norbert Schneider and Robert Schneider.

. There will be a visitation from 4-7:00 PM, Sunday and again after 10:00 AM, Monday, at the Seven Dolors Catholic Church gathering space. Seven Dolors parish prayers will be at 4:00 PM Sunday at the church.

The Mass of Christian Burial, celebrating the life of Valeria Braegelmann, age 99 of Albany, will be 11:00 AM, Monday, November 27 at Seven Dolors Catholic Church in Albany. Burial will be in the parish cemetery.Seven Dolors Christian Mothers will pray at 10:30 AM, Monday in the church.