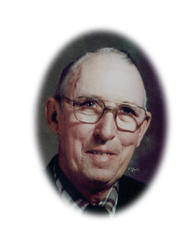 Services celebrating the life of Vernon C. Sohr, age 94 of Albany will be 2:00 PM, Tuesday, October 7 at Our Saviors Lutheran Church in Albany. Burial will be in the Our Saviors Lutheran Cemetery. Vernon died peacefully on Friday, October 3. There will be a visitation after 12:30 PM Tuesday at the church. Arrangements are being made by the Miller-Carlin Funeral Home in Albany.

Vernon was born January 18, 1920 in Cumberland, WI to William and Olga (Johnson) Sohr. He was the oldest of 3 children. He married Pearle White on October 12, 1940 in Cumberland. The couple moved to various areas while Vernon worked as a Group Leader for Honeywell. They also owned the “Hillcrest Resort” in Ogilvie. Vernon retired in 1982 and the couple moved to Albany in 1996. He was a member of Our Saviors Lutheran Church.

Vernon is preceded in death by his parents, his wife Pearle, on May 8, 2000 and his sister, Betty Mouchka.

Services will be 2:00 PM, Tuesday, October 7 at Our Saviors Lutheran Church in Albany